World Press Freedom Day: today, May 3, 2015. But do we have freedom of the press or are words now for sale for propaganda purposes? 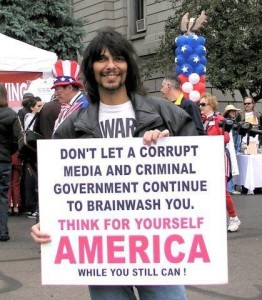 While other places in the world fight for freedom of the press, here in the United States our press sells words to the highest bidders.

Until recently, I did not know about the covert actions behind the No Child Left Behind propaganda machine. As Jim Hightower wrote:

“Just a bad apple,” said the Powers That Be, “an aberration” in an otherwise honest system.

The New York Times wasn’t so kind in their article titled All the President’s Newsmen.

“…the Jan. 7 [2005] edition of CNN’s signature show can stand as an exceptionally ripe paradigm of what is happening to the free flow of information in a country in which a timid news media, the fierce (and often covert) Bush administration propaganda machine, lax and sometimes corrupt journalistic practices, and a celebrity culture all combine to keep the public at many more than six degrees of separation from anything that might resemble the truth.

…[Armstrong Williams] had just been unmasked as the frontman for a scheme in which $240,000 of taxpayers’ money was quietly siphoned to him through the Department of Education and a private p.r. firm [Ketchum, Inc.] so that he would “regularly comment” upon (translation: shill for) the Bush administration’s No Child Left Behind policy in various media venues during an election year.”

This gets even sleazier.

It was USA Today that broke the story and their article began by saying,

“Seeking to build support among black families for its education reform law,…”

Consider those words one more time. … “to build support among black families.” They targeted a race demographic for propaganda purposes.

The No Child Left Behind (NCLB) propaganda campaign did such a number on the country that civil rights groups and others, including our half-black president, continue to believe in the basic premise of NCLB. The country needs to take the time to evaluate the theory of NCLB based on the scientific method.

But here is a theory pertaining to NCLB in general. It is possible that Bush #43 was just walking in his daddy’s footsteps and following Bush #41’s executive order to advance privatization:

“…in order to ensure that the United States achieves the most beneficial economic use of its resources, it is hereby ordered as follows:

Section 1. Definitions. For purposes of this order: (a) “Privatization” means the disposition or transfer of an infrastructure asset, such as by sale or by long-term lease, from a State or local government to a private party.

(b) “Infrastructure asset” means any asset financed in whole or in part by the Federal Government and needed for the functioning of the economy. Examples of such assets include, but are not limited to: roads, tunnels, bridges, electricity supply facilities, mass transit, rail transportation, airports, ports, waterways, water supply facilities, recycling and wastewater treatment facilities, solid waste disposal facilities, housing, schools, prisons, and hospitals.”

Looking at the good side of all this corruption of power, at least in this incidence the actions were taken using government money which more times than not leaves a paper trail for journalists to uncover.

But now, we have “journalism” sponsored by philanthropists. Ever hear of Solution Journalism Network?

As reported from the Education Writers Association 2015 Conference,

“News is spreading that the Boston Globe is going to join the Seattle Times and BRIGHT in taking the “solutions” approach to education journalism, with funding from Gates and others.  That’ll allow the newsroom to hire a second K-12 education reporter (not yet named) and let longtime Globe reporter James Vaznis to do more in-depth pieces.”

I only stumbled upon this because of my recent personal experience with a Boston Globe Common Core op-ed that was printed in my hard-copy newspaper but not in its online version. When there is no way to comment quickly in order to debunk or dispute the words stated as facts, it’s frustrating. It’s not the first time.

A couple of weeks back I called my paper, the Idaho Statesman, because I wanted to comment on an article but couldn’t find it in the online version. Their later explanation was that it was a mistake that couldn’t be corrected.

Today, with another Common Core article, marks the third time that I clearly recall this happening. Despite being called a conspiracy theorist and “nutcase,” it takes getting hit over the head several times before I observe a pattern. Many time in the past, I thought it was my inability to find the articles. Now, I understand the growing pile of notes on my desk. They represent the lies I’ve seen printed which I have been unable to help correct.

This could be “an aberration” in an otherwise honest system; it could be my newspaper. It‘s owned by The McClatchy Co. (third largest in the U.S.). The articles in question were from two different sources —Boston Globe and the Associated Press (AP). The only connection between those two is the fact that the CEO of McClatchy, Gary Pruitt, is the head of the AP. That doesn’t prove anything. But let’s theorize a bit more.

If these omissions to online access are intentional, what demographic group is being targeted for the message? My guess in the case of Common Core is the older voting block.

But, I’m personally done with chasing facts today. If we can’t use what we already know, what good is it?

Specialty: drive adoption throughout an organization.

I uncovered the people behind the Common Core propaganda machine with the thoroughness and integrity of a journalist true to their trade. I just wish I had the advantages of being a journalist — pay, a copy editor, and wide access.

It’s hard work fighting against the media machine armed only with the truth. But it’s a small price to pay.

9 thoughts on “Words for Sale”