The marketing campaign to FIX No Child Left Behind began back in January with announcements that there would be debate.

A draft of the Every Child Ready for College or Career Act of 2015 was released and many newspapers and education associations picked up the story including the American Educational Research Association.

“The draft bill contains several provisions related to research. If enacted, the bill would task the Institute of Education Sciences with evaluating Title I activities. In addition, state plans submitted to the Department of Education would be approved unless the department presented “substantial high-quality education research” that demonstrated that a plan would be ineffective or inappropriate. The bill does not define high-quality education research.

Alexander has made it clear that he hopes to have a substantial discussion about ESEA.”

Discussion? Debate? Both are important and citizens should have been included to help shape and direct the debate about “fixing” the law. After-all, we were the ones who were subjected to the consequences of bad ideas being passed by congress and signed into law, in this case, by then President Bush. And there was never an official parental complaint process!

But instead of the anticipated discussion, Senator Alexander immediately directed “the debate” to the topic of Testing and Accountability while avoiding the topic of national standards themselves by pacifying people with his standard “no national school board” meaningless rhetoric. And the marketers changed the law’s name to get away from the identifying language of the controversial Common Core Initiative (College or Career Ready). The Every Child Achieves Act proved to be more palatable.

How did the so-called debate go? Both the House and Senate bills to replace NCLB maintained the yearly standardized testing for accountability purposes in math and language arts just like in NCLB. What they did do, to sell this fallacy of test-based accountability again, was shift the responsibility for accountability mechanisms to the States. Does that change the problem with high-stakes testing? No. Resources focused on testing are spent. They can’t be used for other things.

But to appease the arts groups, the Senate threw them a bone.

“By naming music and arts as core subjects in the Every Child Achieves Act, the Senate has acknowledged and begun to address the national problem of the narrowing of the curriculum that has taken place under No Child Left Behind (NCLB) for more than a decade now.”

How that will “work” in already underfunded and under-performing schools is questionable but these groups base their feeling of success right now on hope. And they now feel their voices have been heard —one group appeased.

The next topic Alexander approved for a “hearing” was that of Supporting Teachers and School Leaders.

Afterwards, Senator Murray delivered statements that sounded much like what we have heard for years —expressing things upon which we generally agree.

But in the bill itself, although teacher residency programs are prominent in the “definitions” section, it is other elements of teacher and school leadership development and evaluation that dominate the law. Federal “incentives” for teacher and school leader certification and licensing (aligned with challenging standards), alternative routes to teaching, and “reforming” tenure systems are all included. These things are not supported by research as being effective “to ensure that ever child achieves” —the purpose of the law.

And looking at the bigger picture, both the House and Senate versions claim to be shifting the control to the States. In the very real world of D.C. politics, certain organizations that represent the States stand to greatly increase their influence. Take the Council of Chief State School Officers (CCSSO, chief creators of the Common Core Standards System) for example.

CCSSO has a teacher and principal preparation program ready to go. They have included multiple new elements requiring the expansion of technology and data collection systems including….

They have it under CONTROL. Kept in mind, CCSSO is a non-governmental organization that has no responsibility for being responsive to the public’s desires. They are in no way accountable to us. And they have had their sights set on ESEA reauthorization for years —the same number of years as the Common Core State Standards Initiative.

They have a “new deal” for us and for themselves it looks like. We should debate who’s goals they represent.

Did we get to debate any of this? No, it was set in motion years ago with no public participation. Remember, there was no official complaint process for No Child Left Behind and these actions don’t fix that.

No record; no accountability. No debate, only a very controlled dog-and-pony show.

The House and Senate bills passed their respective houses proving that On The Hill, “We mean business on K-12 education.” Those in the education industry know that to be the truth!

Here’s how the market-based reformers see it….

Expanding charters and retaining annual testing ARE in both bills. But wasn’t that federal mandate at the heart of the problem?

Charters? Never debated. Never research proven to be an improvement over existing public schools. Not a reform.

“Streamlining” is a questionable term since programs are actually being CUT and we can’t debate whether or not that is a good thing since we don’t know specifically which ones are being cut other than the School Improvement Grants (which had some useful but never openly discussed results).

Have we even had public officials openly debate what was wrong with No Child Left Behind? How do they know if they “fixed” it if the problems was never fully exposed?

Obviously the marketers know what people want to hear; on that, they did their research.

We want to hear that education reform was honestly discussed and debated. But, the question remains… 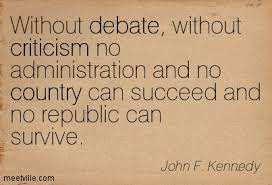 2 thoughts on “What Debate?”