“… when intelligent people scratch their heads and wonder how it was that the citizens of the United State of America inexplicably stood by and unwittingly participated in the systematic demise of their blessed republic, at least they’ll find one comprehensive and compelling explanation…”  Rep. Bob Schaffer, 1998

Have you heard of Marc Tucker? 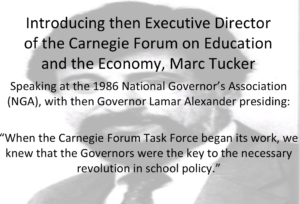 If you haven’t, then you haven’t heard the whole story about how our public EDUCATION system in the United States was dismantled and restructured for Outcome-Based WORKFORCE TRAINING. The dismantling and restructuring isn’t complete, yet. But it is close.

Marc Tucker has a long history as an education “expert.” The short of it is — well-financed and well-connected, he set out to restructure the public education system based on a theory, vision, and plan. What followed was a 30 year “revolution in school policy” built upon his plan. It is still going on today.

Are you familiar with Marc Tucker’s vision and plan?

The vision and proposed legislative package is detailed in a letter to Hillary Rodham Clinton dated November 11, 1992. It’s a long letter. But it does explain the belief that simply fixing the real problems — reforming schools — was not enough for Marc Tucker and his followers. (Here is a 15 page copy.) (Here is five pages of excerpts.) (Here is a synopsis and report card.) Tuckers words are a look inside the corporate-style restructuring of public education to re-tool it into a skilled labor delivery system making some non-governmental entity the national overlords.

It’s a lot to take in but worth knowing about because it is the vision upon which education restructuring in America is based (See the Report Card). It’s true. And just so you know, I have researched and considered this topic long and hard before writing this. I’m in agreement with this author’s statement in a Crisis Magazine article titled “Hillary’s Scarlet Letter,”

While I avoid conspiracy theories and unproductive paranoia associated with the Oliver Stoning of American events, the Tucker/Hillary letter certainly suggests a “conspiracy of vision” and a consensus to implement that vision.

“I thought it important to enshrine the missive via The Congressional Record perhaps as a self-explanatory and incontrovertible marker as to whom, when, where and how the United States of America finally and completely disconnected itself from the proven ideals of classical education – the kind of education the country’s Founders received.

As a youngish, backbench first-term Member of Congress in 1998, I thought someday maybe someone working on a Master’s thesis would like to pinpoint the moment our former republic opted instead for the amply disproven, constrained and anti-intellectual objectives of formalized “training.” …

… I regarded this letter as a signal of an epic American turning point. … It seemed to me at the time, the “Dear Hillary” letter was the most concise, honest and transparent political document of its kind.

Henceforward, when intelligent people scratch their heads and wonder how it was that the citizens of the United State of America inexplicably stood by and unwittingly participated in the systematic demise of their blessed republic, at least they’ll find one comprehensive and compelling explanation… in The Congressional Record on September 17, 1998.” 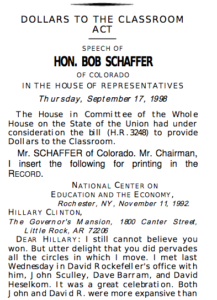 The revolution in school policy that has cost us dearly is typical of “what occurs when special interest groups, divorced from the populace, craft legislation.” — Bill Kimmell