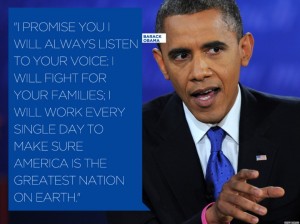 Quote from the presidential debates. www.hlntv.com

President Obama has said all along that the goal of No Child Left Behind (NCLB) is the right one. He also said he would listen.

To close the achievement gap with accountability, flexibility, and choice, so that no child is left behind.”

That is the official wording of NCLB. “To close the achievement gap” is the main goal. How is the “achievement gap” being measured? Standardized test scores. Predictably, that process has been corrupted into insignificance. Why?

The more an indicator is used for decision-making, the more subject it will be to corruption and the more likely it will be to distort and corrupt the processes it is intended to monitor.

Educating children – the educational process – was corrupted due to the intense and limited focus on test scores because the law set that singular goal.

Now consider, what are the chances that President Obama has an in-depth familiarity with the creation of federal education law? That history isn’t even taught to professional educators!

So this is probably what President Obama doesn’t know or fully grasp:

To strengthen and improve educational quality and educational opportunities in the Nation’s elementary and secondary schools.”

That is the aim of the first federal education law in this nation, the 1965 Elementary and Secondary Education Act (ESEA), and NCLB was the first version of that law to change the goal.

Strengthening and improving educational quality and opportunities is a far-reaching goal. Flexibility was inherent in ESEA because of its broad objectives. The individuality of states and schools was naturally protected because of the general nature of the law and because its writers were guided by President Kennedy’s words about the federal role in education.

“Control” —the governing of our schools— was a state and local responsibility and the federal government was willing to partner in ensuring equal opportunity through financial support, dissemination of information, and assistance in training education personnel.

“Accountability” was based on “assessments” of projects and students, which naturally varied depending on the identified needs in a given area of the country. There were many commonly identified problems but there was nothing “standard” about their solutions in individual classrooms for individual students. Testing was tailored to track progress and it was not “high-stakes.”

Standardized “achievement” tests alone can never do justice to the complexity of judging educational quality or in monitoring equal opportunities.

President Obama does know this: 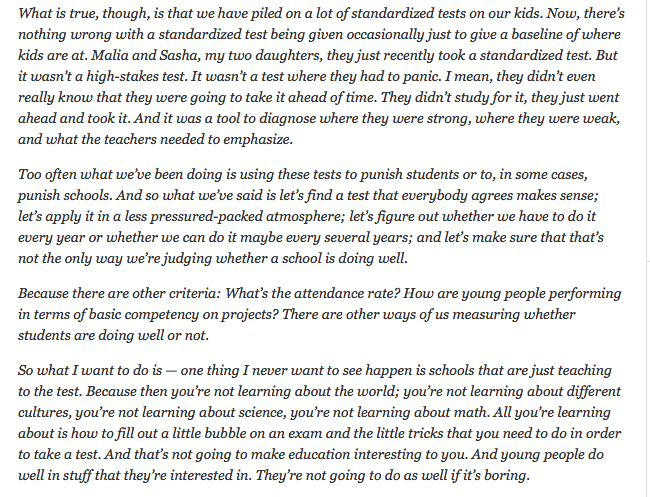 Today, “…the fierce urgency of now” are words that should be echoing across our country.

The clock is ticking on the end of No Child Left Behind. Both the House and Senate are fast-tracking bills that do not make this law “right” for school children. If Congress can not be stopped (which I would encourage people to try), President Obama is our last hope. What will he base his judgment on?

Should the president insist that the goal be reset and that “accountability” will not occur based on yearly-standardized achievement tests controlled from the federal level?

If he listens what will he hear — chatter and confusion, or a clear message?

6 thoughts on “Did We Set the Wrong Goal for Education?”