It rained this morning in the high-mountain desert region of Idaho so that makes it the perfect day to air out the house. First, I’m going to finish airing my grievances with the “Super Supers” presentation.

As most of us commoners know — for leaders to do something we want, they have to believe it is their idea.

So as I listened to Dr. Eric Smith tell a “common” Core story that the Common Core State Initiative hatched in Chicago, I was struck with a notion. What if these people honestly believe this WAS their idea?

I had attended a local Common Core dog-and-pony show and one administrator there enthusiastically believed she had been in on this “state-led” adventure – because Mr. Tom Luna (Idaho’s Chief for Change) had brought her along to… you guessed it…Chicago.

And listening to Dr. Smith tell the same story in his easy, down-home manner really makes it believable.

You can read the Chicago story for yourselves by scrolling down to CORE BEGINNINGS in this Huffington Post article. But it doesn’t tell the whole story. No one seems to be able to do that.

You will hear it told that there was help from some “simultaneous efforts by outside groups.”

Right. Coincidence. And in their efforts to be “credited” with the Core, one group put out their plan ahead of the rest.

No coincidence who was on that planning “committee.” It was once called the Coalition for Student Achievement and none other than the Common Core architect himself, David Coleman, was there. They produced their paper, got their letter to the Obama administration, and got in the news by April 16, 2009.

Oh, but wait; there was the earlier Arizona Governor Janet Napolitano’s part in the Common Core story. She is credited with the “Innovation America” paper written in 2007 and low-and-behold, David Coleman and Jason Zimba joined the effort.

“Coleman and Zimba went to work on a seminal paper for the Carnegie Foundation that called for “math and science standards that are fewer, clearer, higher.” Directors at the Bill & Melinda Gates Foundation saw the paper and were impressed by its ideas. They funded some of Coleman’s work — and eventually dropped as much as $75 million on what would become the Common Core.” HuffPost

This “story” gets better. As Eric Smith explained to the Boise crowd: It was just this casual conversation (I paraphrase because no video yet) — “hey, why should we redo algebra in Florida and you redo it in Kentucky? Algebra is algebra. Let’s work together.” And we were “taking notes on napkins.” Really? You didn’t need to; Coleman had you covered.

But the show must go on … in Chicago…

“At one point, Eric Smith, then the head of Florida’s schools, asked CCSSO and NGA to send around an agreement that would allow states to opt into the process of creating new standards.

Lucky for Smith, that document already existed. [Chris] Minnich and [Dane] Linn passed around a “Memorandum of Agreement” they had written hoping that governors and schools chiefs would sign on. The memo committed states to participate in the process of developing common learning standards, but specified that the standards would remain voluntary.”

“A few months later, the project got a sudden boost from the federal government.” HuffPost

“[Terry ] Holliday, the Kentucky schools chief, said. No one from the federal government attended that meeting, he added, emphasizing that the adoption of the Core was, at least initially, a state-led effort.”  HuffPost

That infamous meeting in Chicago was on April 17, 2009. And it was reported, “A representative of the Education Department was slated to attend the Chicago meeting.”

There must have been a bouncer at the door.

“So NGA and CCSSO representatives lobbied the Education Department several times to get the Common Core standards adoption requirement cut from Race to the Top guidelines. The feds didn’t exactly back off, but they did remove the term “Common Core” from the guidelines, requiring instead that states adopt “college- and career-ready standards.” The administration also allocated $350 million in stimulus cash to fund the development of tests aligned to the Common Core.” HuffPost

Well, at least we know that the government was good at delivering the mail. The coalition’s letter must have gone through.

So much for Rahm Emanuels Quiet Revolution and as far as his statement that “You never want a serious crisis to go to waste,” that is still playing out for education reform. We could come up with a “Fair Shot Agenda.” But no liars allowed in the meeting…so…

Which “leaders” are telling the truth and which have joined the masters of deception?

Until proven otherwise, I’d say the whole damned bunch is trying to pull the wool over our eyes. This is disgusting. Shame on them! Either they are dishonest or just too damned dumb to be leading!

“Our stimulus dollars” went into the hands and pockets of some already well-to-do people while the very schools that we say we want to turnaround are doing without teaching supplies and proper building maintenance. Meanwhile, the public system is being dismantled — parents being told to go homeschool if they don’t like the tests and wish to opt out.

Ladies and gentlemen, the old saying about liars led us to believe that when your laundry is soiled with lies, your pants will catch on fire. I wish. 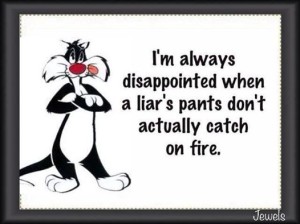 If only it was so easy to tell.    Source:tnvalleytalks.hoop.la

And to all you Common Core supporters out there: look beyond the end of your noses and beyond your own classroom doors and windows. Look into the future and imagine this system “they” are creating. You are enabling them.

You are selling us out. These are not just standards.

I’d personally prefer to talk about the alternatives for helping struggling schools. I’d rather see us do the right thing.

Professional standards of practice and trust in the institution of public education can’t be built on a rotten foundation or one of sand.

The sun is now shining. #TruthBeTold

P.S. My original research on Common Core looked at some of the official players on the development team. What I didn’t know at the time I wrote this blog was how INFLUENTIAL the SMART OPTIONS group was. The April dates seem confusing but it was that confusion that made me look further.

I’m not here to convince people what they should think. I’m here to encourage people to look beyond what they first see, seek the truth….really look for it…before taking a firm stance. And think about more than just their own immediate circumstances. Think about the future.

6 thoughts on “Airing the Dirty Laundry”