May 2009 Governor Otter and Idaho State School Chief Tom Luna signed a memorandum of agreement with the National Governors Association (NGA) and the Council of Chief State School Officers (CCSSO) agreeing to the Common Core State Standards Initiative (CCSSI) in addition to defining the federal role in education for us.

But they said they did so “with the understanding that these standards are not mandatory.”

August 11, 2010 The Idaho State Board of Education approved Common Core with Mr. Luna in attendance.

Mr. Luna campaigned – not on Common Core and Students Come First laws – but on how good a job he had done and that Idaho was on the “right track.”

November elections Yes, Idaho is one of few states that elect the person to head education (because the politics are so great and politics drives school improvement so well?). Mr. Luna was re-elected.

December 15, 2010: Luna named president-elect of CCSSO with his term beginning in November 2011.

January 2011 – Idaho legislative session begins. Lawmakers and the public heard – for the first time – the introduction of what would come to be hated as the Luna Laws (Students Come First –ha). For our Idaho lawmakers, it began on January 12th with a presentation of The Pillars of Student-Centered Education.

Testimony proceeded with heated debate on both sides of the issues. The pillars – technology-replacing teachers through a one-on-one laptop program with online graduation credits required, pay-for-performance, and limiting collective bargaining. 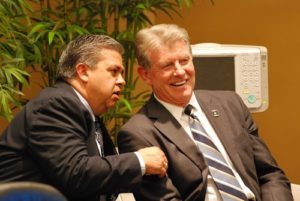 unfolding of the details of the Luna Laws, on January 19th mid-afternoon in front of ONLY the senate education committee, Mr. Luna answered questions asked previously of him on a variety of statistics including class size, teacher pay, funding for new assessments, internet conductivity issues in rural areas, laptop issues, outsourcing of IT services, and just a slew of concerns…yawn…. Then, after a short story about how Common Core began with “an impromptu discussion about common achievement standards among states,” Luna’s Chief of Staff, Luci Willits, introduced Rules Governing Thoroughness; Common Core Standards (Docket #08-0203-1003).

Ms. Willits is the same person who explained, “When the grant was put forth, the SDE [State Department of Education] went to the colleges to ensure that any student who passes these standards will be able to go to any college without the need of remedial training.” And she said, “These standards are just that—they are standards.” Hum?

Since when can people read a set of standards on math and language arts and say “passing” them (the tests I assume) will “ensure” student success without remediation? Given the information they had at the time. is that possible?

Anyway, very few but good questions followed this brief presentation to the Senate Education Committee prior to adjournment for the day. Without further discussion and no testimony from the public (who knew – those watching the session were caught up in the Luna Laws debate), on the afternoon of January 24th Senator Winder moved to approve Docket #08-0203-1003. The motion passed with unanimous consent.

I think this is a great example of Card Stacking that employs all the arts of deception by stacking the cards against the truth. It uses under-emphasis and over-emphasis to dodge issues and evade facts. It uses half-truths.

Truth about Common Core? It is built on a foundation of lies and deceit. And it isn’t just standards; it is a package of reforms of which we have only seen the surface. There is much more below the surface if you care to dig. It includes linking the pieces to the reauthorization of No Child Left Behind (CCSSO again!) and training of all our education “workers.”

I’d rather see us stop a moment.

Public education needs to first fix its foundation of trust and base real reform on proven and ethical principles.

1 thought on “Masters of Deception”