Two “Super Supers” came to Idaho to bring us their wisdom. It is always good to listen to the voices of experience; it helps clarify things. It certainly threw light on some issues for me.

Dr. David P. Driscoll (MA) and Dr. Eric Smith (FL) were brought to Idaho by the Albertson Foundation, which has been financially supporting standards development in Idaho since 1997.

In describing their visit here, the Supers indicated that they were given some of our state data to review. It showed a couple of things that many across the country have known for years; we have a lack of consistency in the quality of our schools and those schools that show up on the bottom of the performance pile tend to do so repeatedly. This we have known.

These experts came to their conclusions by reviewing the data they were given.

Meanwhile, some of us have lived the reality, shouted it from the rooftops, and been brushed aside — because our observations were anecdotal, we can’t do our own research, attempt to draw logical conclusions from data, or we didn’t graduate from the right colleges? (I have no idea what the answer to that question is but Harvard was mentioned more than a couple of times during the evening.)

Anyway, now because of The Common Core …

“You will see for the first time in history, millions and millions being tested on the same level,” Driscoll said. “We will have strong standards and strong assessments and finally we’ll know what we need to work on.”

… O.K., so here is the point where I revert to my upbringing and talk straight.

Dude, you just said we had the data to pinpoint the problem schools, why do you need another set of standards and another new test to point at the same old schools that were already identified? We already knew! This is EXACTLY what we did when we started with this whole standards-based accountability scheme that became the No Child Left Behind disaster.

“We” (as in we observant people) never NEEDED to prove it again. I walked away from this mess before – briefly around 2001 – by giving into the idea that “well, if ‘they’ must prove it one more time, one more way, well…O.K.”

But not again! NO. STOP. 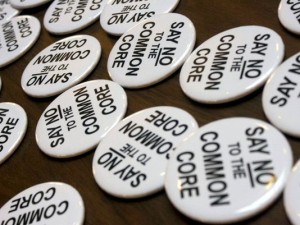 Listen to ALL the Reasons Why.

The principles, policies, and practices we have right now were created by the very same people now saying that this time they have it “right.” How can they?

Those still pushing the standards and assessment theory of reform aren’t making sense. They say The Common Core should be used to compare to other states. Why? We already can compare, contrast, and deduce which schools need help….S.O.S. Send help.

Dr. Smith did give mention to Ronald Edmonds work. I’d advice he listens to himself and to Edmonds original research. Edmonds noted that schools he investigated — which were high-poverty, high-“minority” schools that had successfully improved beyond “expectations” — all saw the local school as the focus of analysis and intervention.

Given the tools and the chance, we local yokels can pull on our boots and “kick” … We need to start by kicking some you-know-what out of the way!

The “experts” got it wrong.

P.S. Mr. Rodgers got it right.