“We must support families, communities, and schools working in partnership to deliver services and supports that address the full range of student needs.” 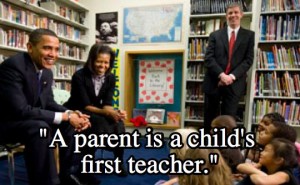 From A Blueprint for Reform: The Reauthorization of the Elementary and Secondary Education Act (ESEA), 2010

Sounds great! But the Blueprint was written to fail. Parents became an afterthought, the funding was backwards, and privatization was stamped all over it. The plan designated formula funding for wants, experiments, and pushed a political, ideologically driven, education industry agenda while leaving student needs to be filled through competitive grants. And the time-proven, research-based, essence of the original ESEA was hidden behind verbiage sure to raise political conflict. Written to fail.

But, never mind. The Blueprint isn’t really a big obstacle because the real responsibility for ESEA reauthorization is in the hands of Congress. The best thing that could happen right now would be for the people in this country to decide if they agree or not with the proposals coming out of the House and Senate.

And we deserve to know if the president is clear in his own mind as to what principles he stands upon. When the law lands on his desk, by what standards will he judge it? He has given us mixed signals.

Does the Obama administration firmly believe that education is a “shared responsibility”? Will policy reflect that concept? Does the administration comprehend how parents, families, and communities were once central to federal education policy? Do they know how parents are treated in dysfunctional districts, the under-performing ones that they say they want to “turnaround”?

In education policy in general, we parents have not just been directed to the back of the bus, we’ve been shoved out the rear door and left on the curb.

The reality over the years has been that parental “involvement,” “engagement,” “participation” — whatever the flavor of the year happens to be — has been more of a sound bite than sound policy. In too many districts, No Child Left Behind’s parental participation requirement was implemented on paper only — schools meeting rule compliance without doing the right things.

Knowingly or not, President Obama clearly expressed a focus for ESEA reauthorization — to support partnerships that deliver services and supports that address the full range of student needs.

Then under the heading Rigorous and Fair Accountability and Support at Every Level (p9), the presidents’ Blueprint went on to state;

“States and districts also will collect other key information about teaching and learning conditions, including information on school climate such as student, teacher and school leader attendance; disciplinary incidents; or student, parent, or school staff surveys about their school experience.”

In those words, we have a new beginning for an accountability structure originally envisioned in Education Counts.

“The information system needed to develop education indicators should be organized around major issue areas of enduring educational importance.”

If parental, family, and community support for students isn’t of enduring educational importance, I don’t know what is.

So with a focus and a way to monitor improvement, all we need is a research-based proposal to finally make right the school improvement portion of ESEA to ensure it is truly inclusive of parents, families, and communities.

That’s where “Keeping PACE” comes in. The Keeping Parents and Communities Engaged (PACE) Act was sponsored in the 111th Congress (2009-2010) by former Senator Edward Kennedy. It was introduced into the Senate Education Committee and never went any further.

The problem with Keeping PACE as it was proposed is that, like the best ideas in the Obama Blueprint, it was a competitive grant proposal for something that impoverished communities badly need — it’s not a want; it’s not an experiment. It is a need. Parent and community engagement must be given the priority that only adequate and fair formula funding can do. 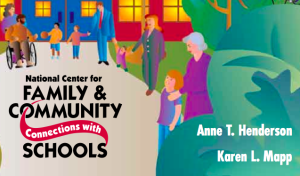 We have research-based best practices for family and community engagement. Research shows there is “…strong and steadily growing evidence that families can improve their children’s academic performance in school. Families also have a major impact on other key outcomes, such as attendance and behavior, that affect achievement.”

The basic idea of Keeping PACE is this: Title I money is used to hire Parent and Community Outreach Coordinators to coordinate already existing community resources to support students, their schools, and their families making schools the centers of communities through education and services focused on a community’s identified needs.

“It isn’t just about more programs. It’s about leveraging existing resources to help students succeed in the classroom.”

“Wise use of existing community resources” was one of the basic foundational philosophies of the community education concept that was the essence of the 1965 ESEA.

One of the faulty assumptions of No Child Left Behind is that struggling schools “just lack motivation” so they need punishment and competition to spur them to improve. Not true. They lack the resources to build a strong foundation for success. They lack the “capacity” to do their jobs.

“Capacity building is any process that increases the capability of individuals to produce or perform; it enables all stakeholders to carry out their tasks to the best of their ability.”

To enable federal education law to support improvement in the struggling schools in this nation, we need publicly trained and educated leadership who understand the community education concept so they will work WITH families and communities. Plus, we need our U.S. Department of Education to disseminate information that has been researched with the utmost integrity so that it does NOT have to carry a disclaimer like this:

The expectation should be that all information disseminated by our government agencies is fully vetted and represents research of the utmost integrity.

Bottom line, we need the big money out of education policy and we need to take “meaningful, practical” steps like Senator Obama suggested in 2008.

With a resurrected and improved Keeping PACE Act, a new emphasis on leadership training, and renewed prominence of dissemination of “research-based” best practices in community organizing for improvement, we can take a giant leap forward in building community partnerships that support and serve students.

We the People need to demand that Congress and President Obama make the most important student supports — parents, family, and community — a priority in ESEA reauthorization. Speak Up!

Leaders — NOT the ones you see and hear about in the news but the kind that I saw in action last week at a local high school. There are men and women in the trenches of real school reform that should give us all reason for hope. These are leaders that embrace solutions.

School principals have a responsibility to “work with the teachers … and serve our kids and their families” (to quote another common person).  These are the people that make real reform happen. They have the responsibility to improve education for every student but they don’t always have the power, control, and freedom to do it. This is why “we” need to better define the governing roles in our education system.

The principal IS the most important person in the hierarchy of school administration – in my opinion. And in too many cases that I have witnessed, they aren’t being treated as such or allowed the time to do their jobs effectively.

So last week having witnessed a principal working to develop community partnerships by first stressing that the focus is the students was uplifting. And watching him acknowledge through actions and words that it will take teachers, counselors, other staff, and the community to create opportunities for students should serve as a reminder that it is this philosophy of practice that policy and funding should support.

I hope readers out there won’t be fooled again by the language (messaging) associated with the re-writing of No Child Left Behind (called ESEA, the Elementary and Secondary Education Act). When you hear the words “restore local control,” ask; “how exactly?”

When principals embrace positive change and have education laws supporting them, great things will happen! 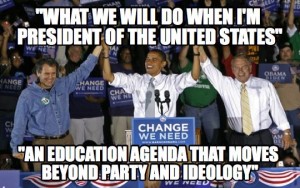