Our Schools, Our Responsibility to leave them standing strong for the next generation.

Where would I be without the American government schools that I’ve known most of my life as “public schools”?

No one can say with certainty what might have been. But in this case, with the governing of “government schools” being taken out of the hands of the public, think about our country without public schools.

My grandfather on my dad’s side died when his family was still very young leaving my Grandma Young raising a large family on her own. The family lived on “the other side of the tracks” — figuratively and literally in my hometown. Back then, the area was looked at as the “black side” of town but like most labels, there were exceptions like being low-income whites.

But the government schools in this Midwestern blue-collar town were decent enough, the military during WWII offered the GI bill, and anyone with the ambition, talent, and “grit” to improve their lives could prosper with the help of government education programs.

My dad ended up teaching upper-level high school mathematics for 30 years and built his own small businesses, which he still operates. He started with a Dairy Queen to supplement his teaching during his summers “off.”

Could he have gotten this far in life without government schools? Could he have advanced his education strictly with his paper routes and iron factory work? Well, the factory is gone now so no one there can do that anymore. And I think it’s fair to say that without a chance to further one’s education is some way, success in business is an exception, not the rule.

If he hadn’t gotten ahead in life with the help of government education programs, like the GI bill, where would I be today, a girl on the bottom rung with six brothers? If family resources are limited, what do you think? Well, I’m pretty sure, like many of us have done when our own children were looking at colleges, we’d do the math.

Without government-run public schools —publicly governed, publicly supported— I’m pretty sure I would not have had the opportunity and pleasure of serving the public as a doctor of veterinary medicine for the last 30 years. The freedom to choose the profession I did was only possible because government schools exist in America. For that, I am thankful.

And for that reason, it is worth fighting to preserve the system.

“An Act —To strengthen and improve educational quality and educational opportunities in the Nation’s elementary and secondary schools.” The 1965 Elementary and Secondary Education Act … This is the type of law we need.

To all my fellow warriors supporting the effort, I’m thankful you are in the fight.

Happy Thanksgiving! Enjoy the day; you deserve it.

UPDATE 11/25/19: My father passed away in 2016, 4 months shy of 92, still working in his businesses with his mind as sharp as ever. His warning was for us to take note of the similarities of our times to pre-WWII. With that in mind, we should be thankful that we live in a republic and be asking ourselves what we can do to keep it.

Leaders — NOT the ones you see and hear about in the news but the kind that I saw in action last week at a local high school. There are men and women in the trenches of real school reform that should give us all reason for hope. These are leaders that embrace solutions.

School principals have a responsibility to “work with the teachers … and serve our kids and their families” (to quote another common person).  These are the people that make real reform happen. They have the responsibility to improve education for every student but they don’t always have the power, control, and freedom to do it. This is why “we” need to better define the governing roles in our education system.

The principal IS the most important person in the hierarchy of school administration – in my opinion. And in too many cases that I have witnessed, they aren’t being treated as such or allowed the time to do their jobs effectively.

So last week having witnessed a principal working to develop community partnerships by first stressing that the focus is the students was uplifting. And watching him acknowledge through actions and words that it will take teachers, counselors, other staff, and the community to create opportunities for students should serve as a reminder that it is this philosophy of practice that policy and funding should support.

I hope readers out there won’t be fooled again by the language (messaging) associated with the re-writing of No Child Left Behind (called ESEA, the Elementary and Secondary Education Act). When you hear the words “restore local control,” ask; “how exactly?”

When principals embrace positive change and have education laws supporting them, great things will happen! 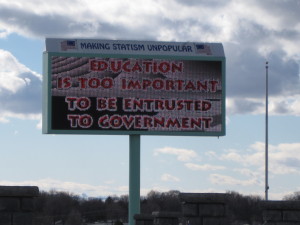