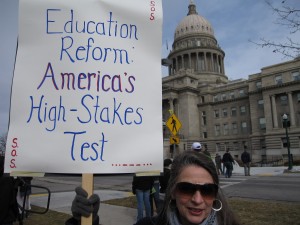 Those that think education reform will come about through standards, testing, labeling, and degrading schools obviously don’t understand what “reform” is and is not.

Reform requires a problem be identified and the faulty practice creating the problem be replaced with a better one. When we tack on “education” in front of the word reform, it implies we are talking about a reform of the education system.

Systemically, did every school set low standards and miserably under-educate children? No, we have some very highly performing public schools; they are in the majority. Does any school under-test their students? Not that I’m aware of. Is the whole system to the point where there is no hope for it and it should be dismantled and privatized? Absolutely not! That is what reform is not. That is a simple transfer of control from public to private hands. It’s a costly shell game.

Real education reform requires that the public come to an understanding of what proven effective education reform really is and develop the drive and unyielding determination to establish all the elements of success in every school.

“We can, whenever and wherever we choose, successfully teach all children whose schooling is of interest to us. We already know more than we need to do that. Whether or not we do it must finally depend on how we feel about the fact that we haven’t so far.” Ronald Edmonds

Edmonds (1935-1983) was the lead researcher for what became known as Effective Schools Research.