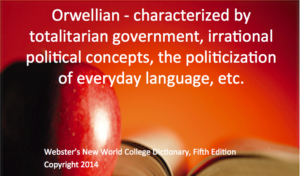 George Orwell, author of “Nineteen-Eighty-Four,” was only off by a month when it comes to the rise of Orwellian education reform. As to the method that brought on this madness, he was right on.

“It’s a beautiful thing, the destruction of words,” says a character in 1984.

Gayle Greene chose that quote for “In the public schools, it’s been 1984 for quite awhile.” It describes the intentional, well-financed war of words used to discredit, undermine, and destroy the U.S. institution of public education.

Turn the words on their heads, and you get a glimmer of the truth.

No Ministry of Education? … Truth be told.

On February 6, 1985, President Reagan swore in Bill (William) J. Bennett as the United States’ third Secretary of Education. Then, the saga of Orwellian education reform began in earnest.

”Bill Bennett is the first Secretary to understand the ideological and political possibilities of the office that were there from the beginning. In Bill Bennett we’re getting our first Minister of Education.” Daniel Patrick Moynihan

Bennett used his appointment to accelerate the political agenda of standards, assessments, accountability, flexibility, and choice. All those words, all those concepts, were turned on their heads. Orwellian education reform hatched and grew.

The Minister brought in his Three C’s —content, character, and “choice.” But we weren’t asking for “choice.” Almost 80% of parents were satisfied with their schools. And notably, we were saying smaller classes would make a difference to each and every one of our children.

No! The Minister says we need “accountability.” 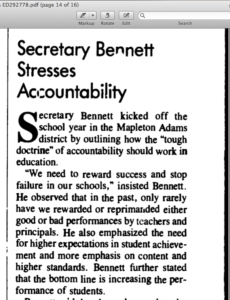 AND, we need “higher standards.”

Only 17% of us thought “higher standards” would improve public education. Then WHY? Why push the theory of outcome-based (standards/testing) reforms on the nation? WHY transform our whole system?

But at the time not everyone believed the Minister was sincere about his concerns for ALL our children.

“‘I think he [Bennett] still might be the subject of hearings if we had known during the [confirmation] hearing of his insensitivity toward the needs of students, particularly low- and low-middle income students who can only go to college because of federal aid,’ [Senator Robert] Stafford [R] said in a telephone interview from Burlington, Vt.“

While time marched on so did the Orwellian education reform movement. As Ms. Greene explained,

“A handful of billionaires and their foundations bankrolled and orchestrated a multibillion-dollar PR campaign to convince people that public education is broken and private interests can do it better….

The confounding of language at its most basic level reduces us to a state of civic catatonia: we can’t think about these issues, let alone discuss them or act against them, when they’ve been so obfuscated, when words have been so twisted.”

Thus, the “information age” hatched the “knowledge economy” which multiplied technology profits at every turn. And the first Minister of Education took full advantage of being in on fronting technology and choice as “reforms.”

“K-12’s spread across the U.S. is due in large part to its lobbying prowess and its political connections. Enabling legislation, written by the American Legislation Exchange Council (ALEC), has been introduced in nearly every state. “ALEC, … coordinates a fifty-state strategy for right-wing policy. How Online Learning Companies Bought America’s Schools, The Nation, December 5, 2011″

Ohhhhh…., too bad the D.C. revolving door of Orwellian education reform didn’t hit Mr. Bennett in the rear and knock him out of the circle of influence. The country was making real progress prior to being told we weren’t. ALL our children would have benefited from true education reform. But that isn’t how the story goes…Oh, so much truth to be told!

It is no secret that William Bennett and Lamar Alexander (Chairman of the Federal School Board) are buddies. They brought the Orwellian education agenda to exactly where it is today.

After the [Bob Dole] campaign, Empower America plans to continue promoting school choice, and Mr. Alexander is expected to take a lead role.

‘We’re planning on [Mr. Alexander] coming back and being a part of a big school-choice initiative,’ said spokeswoman Nicole Fluet.”

And Alexander landed where he sits today —chairing the Senate Health, Education, Labor, and Pension (HELP) Committee…..Yes, HELP. … Talk about Orwellian. But alas, the plot thickens as the characters multiply.

“We should remember that it was George Bush, Lamar Alexander, Chester Finn, Diane Ravitch, Bill Bennett, the Hudson Institute, and the Committee for Economic Development that got the America 2000 ‘reforms’ rolling. And it was George Shultz in the Reagan Administration who signed the Carnegie-drafted U.S.-Soviet education agreements with Gorbachev. That was in 1985, the same year Carnegie brought Marc Tucker on board.” 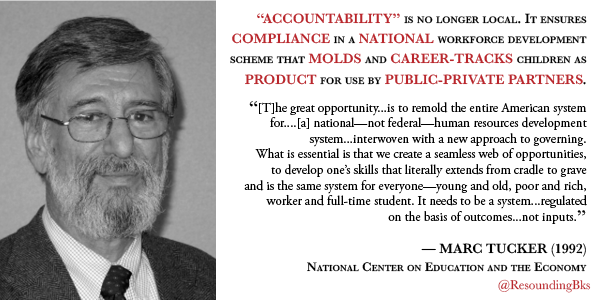 “If we are to succeed in radically transforming schools, we must alter attitudes outside the schoolhouse door. …

The system we are about to describe is one interwoven fabric.  Each part is necessary for all the others to function properly.  But if there is a centerpiece, it is, without question, standards and assessment.” Marc Tucker

WHY? Why did we need higher standards, fewer-better tests, outcome-based accountability, (the undefined) flexibility, and “choice”?

Doublespeak? Absolutely. Marc Tucker doesn’t believe in fewer tests (as he now writes). He believes in “national” mastery tests in every subject and certification tests for everything. He believes in a tracking system that creates the perfect workforce-development system all under the guise of education and economic needs.

We were told our businesses asked for these reforms. 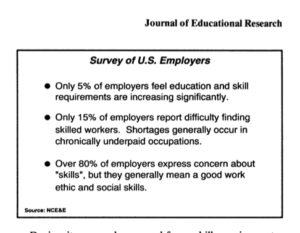 NO! Employers asked that we improve the work ethic and social skills of our students —back then. Now, we also need to repair the damage done through standardization of curriculum and instruction….Oh, and the damage technology has done.

We asked for one thing; we got another.

Parents didn’t ask for this transformation towards a computerized, standardized, non-personal (but “choice”) education system. There was never any proof that any of it “worked.”

“Trust a billionaire to have the public’s interest at heart [?] …

But the BOTTOM LINE: This was to increase student achievement, right? 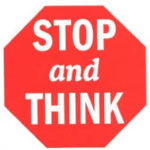 Truth. “Higher” standards don’t matter when it comes to increasing student achievement. As much as the truth is hard to believe, it’s harder to swallow. But after over 18 years of standards, testing, and data collection, the only good that has come out of this is the statistical proof of the truth. 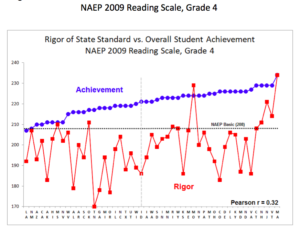 Reading Achievement – States are listed on the bottom. Red represents how “high”/ rigorous the standards. Blue is the outcome for each state. 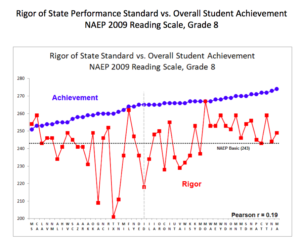 Reading – Grade 4 or 8, it doesn’t matter. The standards don’t predict the outcome. No direct correlation.

This is the outcome after well over a generation of students in a standards-based education system.

See the Relationship between the Rigor of a State’s Performance Standard and Student Achievement in your state and our nation…..There isn’t one.

The statistician/author is a retired NAEP (National Assessment of Educational Progress) expert. 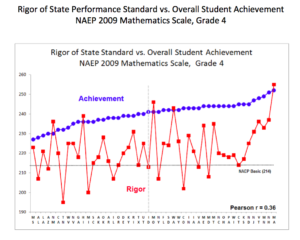 Math – same findings. There is no evidence that the standards make the difference.

The title of the researchers’ site indicates this is Idaho research (his location) but this is national data, nationally relevant.

Reading or math, 4th or 8th grade, it doesn’t matter. Standards don’t correlate to student achievement. They never deserved the attention NOR THE MONEY we focused on them.

Theory has been proven wrong. 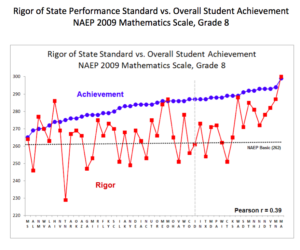 Math 8th grade? The patterns are all over the place because the truth is in the numbers that the education oligarchy wanted collected.

So — now given the truth — to continue mandating an irrational political concept is government sponsored educational malpractice.

With the truth proven by the very measures we were forced to use, test scores, our duty to stop the Orwellian education reform movement should be clear.

Flipping the words of the new Minister of Education, they spell education tax credits and vouchers. They spell the destruction of our public education system.

And clearer yet is the fact that this has been “their” education revolution and they don’t care about ALL our children. Look at the push for excessive technology in schools. The pushers have no regard for what technology is doing to children, or even their test scores!!!!!…. 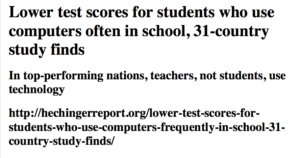 …The public and lawmakers in my state of Idaho put technology ahead of teachers at a huge cost to taxpayers with an unknown cost to children and families.

“[Albertson’s supermarket heir Joseph B.] Scott’s investment company, Alscott Inc., has brought in more than $15 million by selling part of its stake in Virginia-based K12 Inc., which was founded in 1999 by former U.S. Education Secretary William Bennett.

But it isn’t just luck on Scott’s side. His family’s tax-exempt foundation has helped develop customers for K12. And Idaho’s taxpayers have been paying for it.”

….It is a familiar story across our great nation…. Those fooling the nation are calling themselves “philanthropic venture capitalists.” Do you know who they are in your state? 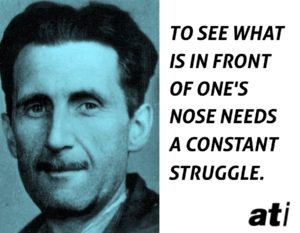