Public education in America is at risk as long as mass deception can continue unchecked.

When it comes to education policies and the organizations and individuals pushing their agendas into law, the public is ill-equipped to distinguish truth from deception because of a long history of misinterpretation of statistics, massive misinformation, and outright political deception.

Truth: Schools must continuously be improving themselves.

That truth is based on the premise that the public education system faces ever-changing obstacles to offering equal educational opportunities — changing student populations, changing demographics of the students, turnover of school personnel, and a multitude of variables are demanding schools be responsive to societal pressures of all kinds. 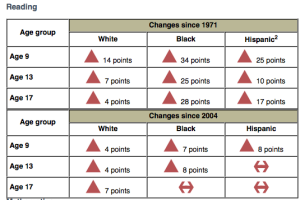 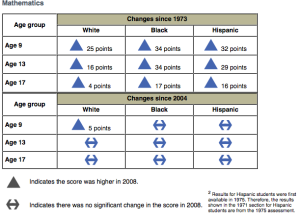 Truth: The public schools have made progress despite economic and political upheaval. Notable improvements were made in the 70’s through 90’s and is continuing but at a slowed pace.

Truth: Current education reform policies are based on deception.

Education reform became a problem when politicians took the reins and their driving premise required deception. As Douglass Cater, an adviser to President Johnson, explained,

Plus, there was fear that the general public would not stay involved in public school improvement unless there was an urgent need – a crisis. But this line of reasoning is no excuse for the mass deception that followed.

Policymakers of the 80’s moved forward with half-truths to put in motion an ideologically driven education reform agenda — standards, testing, and accountability based on achievement tests — the outcome-based theory that we can judge schools based on test scores.

And because the theory was intentionally marketed and the lies repeated so often, the deception became the public’s truth. Repeatedly, we acted on that “truth.”

So briefly, here’s how we Americans allowed ourselves to be deceived. Keep in mind, the public education system tends to be a reflection of society. A brief history of “the times” is necessary.

With the mentality of the 80’s firmly focused on making money, public institutions reflecting society, and “the origins of the standards movement in American education [being] largely economic,” the idea of standards and testing as a quick way to judge schools was an easy sell to busy parents.

The problem is, standardized tests were NEVER proven to be a great judge of quality education and our standards were NEVER proven to be the main problem. That’s where the deception comes in — over the two major factors upon which we now base not only accountability of the system, but also our theory of improvement. And we continue to ignore real solutions.

Deception: Test scores should be used to compare and rank schools.

To understand the ruse behind the misuse of test scores, you have to understand Simpson’s paradox. Like most of you, I am not a statistician so don’t let this scare you off. Basically, this paradox can happen when comparing two or more groups. A statistical trend may reverse or disappear when the groups are combined. At a glance, it is very counter-intuitive but is one reason why statistics are so susceptible to misuse and abuse.

So when we look at combined scores or average scores, we can follow trends but it is not advisable to base decisions on scores alone without further analysis and interpretation.

Deception: Based on test scores, the United States is failing educationally and it will require us to totally transform the system.

The country set course on the outcome-based theory without being fully informed. Politicians told us after the release of A Nation At Risk, in 1983, that we were falling far behind internationally. But, international scores are reported as combined numbers leaving the public unable to detect any deceptive use of those numbers…unable to think through the effect that Simpson’s paradox might be having on our conclusions and therefore our actions.

At one point, we could have stopped this. In 1991, Sandia National Laboratories scientists took on the analysis of education data and they interpreted what they saw in addition to critiquing proposed education policies. Apparently, politicians didn’t like what these researchers had to say.

“More people in America are aspiring to achieve a college education than ever before, so the national SAT average is lowered as more students in the 3rd and 4th quartiles of their high school classes take the test. This phenomenon, known as Simpson’s paradox…”

This is not to say we can’t do more to educate children of poverty. This is to point out how deceptive numbers can be and to ask the question, have our reforms focused on the right things?

“The major differences in education systems and cultures across countries diminish the value of these single-point comparisons.”

In other words, international scores should not hold great significance in our decision-making and now would be the time to question why we are allowing the United States education system to be standardized through international “benchmarking.”

Why would we do that when the truth is…

Organisation for Economic Co-operation and Development (OECD) countries can be seen here.

This information is from The Condition of Education 2015. Why isn’t the media reporting on the actual condition of education? Why isn’t Congress and the president basing decisions on the truth?

The truths revealed in the Sandia Report never got public attention through either our government or media so the deception of statistics rolled on for decades.

“Seldom in the course of policymaking in the U.S. have so many firm convictions held by so many been based on so little convincing proof.” Clark Kerr, President Emeritus, University of California

Truth: The varying quality of state standards and assessments does not correlate with student achievement as judged by our nation’s gold standard of tests, the National Assessment of Educational Progress (NAEP). 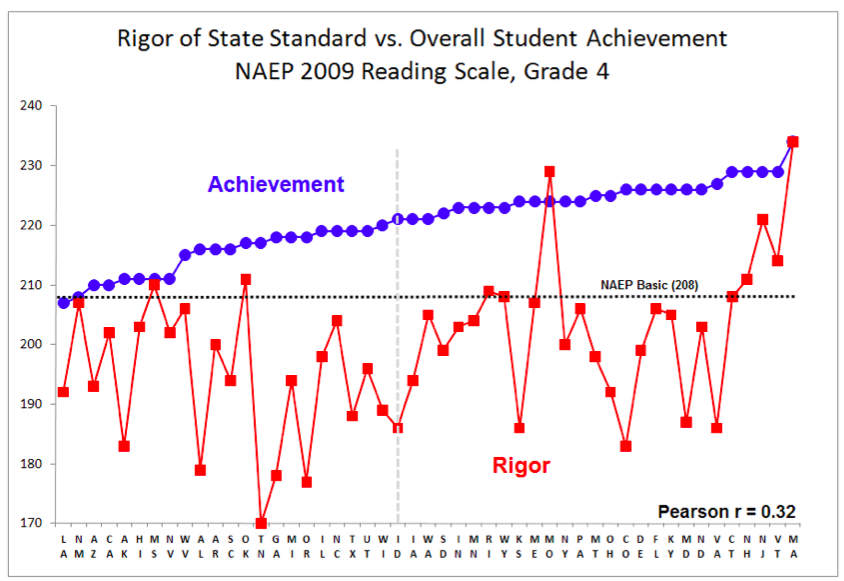 The blue dots represent NAEP scores with Basic meaning meets “grade-level expectations” or “C” level work. The red squares represent the “rigor” of each states standards assessments as compared to NAEP. Student achievement does not appear to depend on the rigor of a states standards and assessments. Other graphs and explanations are provided by NAEP expert Bert Stoneberg.

If the variability of state standards and assessments do not affect overall student achievement, why are we focusing money, time, and effort on changing standards and tests as THE first step in improvement? It’s the wrong step. It makes no sense.

11 thoughts on “Distinguishing Truth from Deception”