In politics, we have witnessed the detrimental impasse of rigid ideologues unable to legislate responsibly no matter how dire our needs. In the education wars, the sides are no different — unyieldingly stubborn —but the education wars are on many fronts. There continues to be new vs. old math, whole language vs. phonics but now we have our modern “education reform war” with all it twists and turns.

One result of the education wars thus far is the takeover of our education policies and practices at the exclusion of “us” in the process. So now we have a full-blown greed-driven, politically motivated power struggle pitting those wishing to end neighborhood public schools, as we have known them, against those wanting to preserve and improve them.

The high level of frustration produced by the education wars has made easy pickings for those looking to make a buck off of us, the government of the people. That’s the bad news.

The good news? We have the opportunity to end this war by making the Elementary and Secondary Education Act (ESEA) right —again.

The top-down education mandates for accountability tied to higher “achievement” scores, through No Child Left Behind (NCLB*) only furthered our resistance to change, made a bad situation worse for many, and escalated the education wars.

(*Note: NCLB was formerly ESEA and now called the Every Student Succeeds Act since 2015)

Scholars, politicians, and pundits are fighting over issues most citizens can’t fully comprehend while many patrons are growing frustrated and walking away. Still others are spending their time and energy protesting and actively working to gain back some control of the legislative process. Many of these people are mothers and fathers whose time should be focused on their children.

This war appears to have started over the question, is there a crisis in education? Well, there is now. The war has been smoldering beneath the surface for 30 years and now has parents fighting for their rights while trying to obtain a good education for their children. Through all this one fact remains certain, over the last three decades of attempted education reform, children have fallen through the cracks while adults fight about who is right.

Did political and business leaders take over education policy and now dictate classroom practices because they found “the establishment” educators inept and unwilling to listen? Or did they take over as part of a plot to undermine our republic through standardization and privatization of our schools? Frankly—I don’t give a damn if it was the chicken or the egg that started this. Both “sides” are doing harm to children’s opportunity to learn and to what was once revered as the best system of free public schools in the world.

The “education reform wars” have got to stop. This tug-of-war over opposing political agendas is leaving behind teachers, students, and their families as collateral damage. It is time to stop fighting against each other over the smaller problems we can solve at the local level and take on the far more threatening problem — national education reform policy. 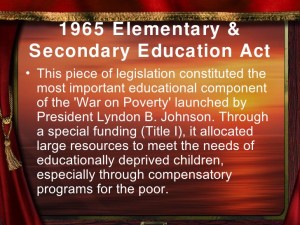 The national education policy process is flawed because the conversation and debate is being controlled — the voice of the people excluded. And the law has not been about the children. If it had been, it would have been changed on time in 2007 when we knew with certainty that it was doing harm.

This fight will only be for the children if we make it so. Now is the time. The reauthorization of ESEA in 2015 failed to change what needed changing. That door of opportunity closed. Now it is up to us to end the American Education Reform Wars our way.

“Power concedes nothing without a demand.” Frederick Douglass

6 thoughts on “The American Education Wars”