If we kill No Child left Behind and do an autopsy, buried deep in its bowels you will find the 1965 Elementary and Secondary Education Act (ESEA).

Over time the guiding principles of ESEA have become obscured with almost 1000 pages of ideologically and financially driven “projects.” From venture capitalists looking to pocket more public dollars through products and services, to our military gaining access to student data for easier and targeted recruiting, to the establishment of national standards without really talking about who controls them — the No Child Left Behind Act has been the place to put the devils details. When ESEA was 35 pages long, this was not a problem.

At the heart of ESEA is Title I. Its purpose was to even the playing field for our nation’s youngest citizens. 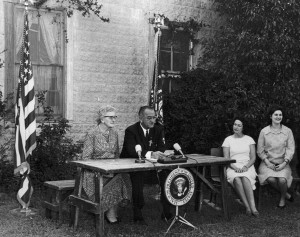 By investing federal funds to meet the needs of “disadvantaged” children, it is known as one of many “War on Poverty” laws because the original funding formula focused on children from poverty-stricken families. That flow of funds, like the major vein coming into the heart, enabled ESEA to function.

The autopsy reveals a couple of large strictures in that main vein.

The original formula funding used each state’s average dollar per student and allotted half again as much to focus on meeting the educational needs of those children living in poverty. The formula was quickly changed to using the national average in order to better help the “poorer states.” However in 1968, only three years after passage of ESEA, the formula funding was made “conditional upon availability of sufficient appropriations” (Congressional Quarterly. Congress and the Nation: A Review of the Government and Politics During the Johnson Years, Vol. II, 1965–1968, p710. Washington, DC: Congressional Quarterly, 1969).

Availability of federal funds for investment in education took a backseat to the funding for the Vietnam War. The law was crippled but did not die.

Through the shear fortitude of the people willing to keep the dream of equal opportunity alive, the law underwent attempts to make it right with “reauthorization” occurring every five to six years. But in 1978, the focus of funding shifted to whole schools instead of remaining dedicated to meeting the needs of disadvantaged children.

Forgotten it seems was this 1966 warning by the National Advisory Council on the Education of Disadvantaged Children:

“…it is important to keep the purpose of Title I in sharp focus…The efforts of Title I should not be merged at this time with general aid for schools…in the administration of the Title, it is important to insist that its objective is to help children, not institutions.”

Today, there is no sign of rectification. This is where we stand –Title I, Part A .

The focus is blurred and the money is seen as general aid to schools.

Title I is crippled and blinded but ESEA had four other titles.

Like the oxygen-poor blood coming into the heart is incapable of sustaining life without the rest of the circulatory system working effectively, funding alone is not enough to improve access to “quality” education. To improve overall educational quality so as to ensure equal access, the other titles were to be guided by the identified needs of impoverished communities. Never forgetting that Title I is the heart of ESEA, improving and strengthening the whole public education system was the bigger purpose of the other ESEA titles.

Title II focused funding on instructional materials including textbooks and school library resources, which benefitted all students. Title III filled “services” gaps as identified by community needs assessments. Title IV, known as the Cooperative Research Act, was designed to provide research, training, and dissemination of information aimed at improving the quality of teachers and counselors. And Title V was “to stimulate and assist in strengthening the leadership resources of State educational agencies” because the writers of ESEA understood that the states failing to improve at a satisfactory rate lacked the competence to improve themselves.

The lawmakers back in 1965 recognized that disadvantages of various kinds led to the inequalities in educational opportunities. No single artery or vein of improvement improves the viability of the system. Every part needs to serve its purpose.

Through materials and services that support teaching and learning, better university training of teachers and counselors, and better distribution of “best practices” to the states and the communities who need them the most, the 1965 ESEA attempted to bring social justice to the education system by focusing federal funding on the needs of impoverished children. The country invested in them.

At the heart of ESEA are strong, reasoned, and researched-based concepts.

But with the current ESEA reauthorization now being narrowed to pre-determined topics of discussion and fast-tracked after an eight-year delay, the People need to scream for a halt to the process. The autopsy is not complete. It has only just begun.

The public hears that federal education law, NCLB/ESEA, didn’t work to improve education but until the people understand what went wrong in the past, the country is doomed to continue allowing the diseased portions of the law to kill the system.

Does it sound to you like the law ever had a fair shot at addressing the unique educational needs of poverty-stricken children?

And there is much more to consider.