“How the Democratic Party Became an Enemy of Public Education” explained how both Republicans and Democrats are selling the idea that private-sector education reforms have the best interests of all our children at heart. They don’t.

Advocates for private entities controlling the public schools have completely ignored facts, research, and us. The consequences their policies have on our schools, communities, and children are harmful. The leaders of this private-sector education revolution know what they are doing. And they don’t care about the harm being done. They aren’t accountable to any of us.

And never forget, both Republican and Democratic leadership have no faith in the idea that We, the People, have enough brainpower and manpower to fix our own problems, in our own schools. Those in power trust Washington D.C.’s think tanks and education industry corporations to come up with “innovative” education reforms to sell to us.

Bull roar. These influential people pushing the levers of power are destroying our public education system. Their latest innovation? The claim to be proposing “progressive” or “centrist” education reforms for the Democratic Party. The truth; their agenda is neither. And they are paying the “grassroots” to advocate for them. It’s being done through confusion, propaganda, and indoctrination.

Progressives advocate for the best solutions based on the latest information.

Progressives expect the political system to respect the scientific method of problem solving.

Progressivism is hard to define because progressive principles change based on evidence.

Important to discussing this further are the following points from “How the Democratic Party Became an Enemy of Public Education”: 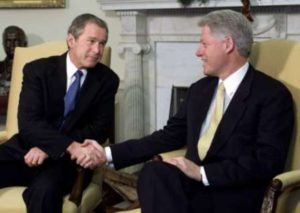 Here’s where the story really picks up steam.

After George W.’s election, the Democratic Party felt the need to seek a stronger focus and more money. At that time, the view of Democrats was…

“the Republicans, on the other hand, seem to favor big business.” JUNE BRINES

”We don’t have the money [to compete with the Republican Party].”

An ally of Mr. From and Mr. Reed, Will Marshall, leader of the Progressive Policy Institute (think tank), said the party must…

”show that we can make progressive government work.”

The Democratic Party leaders went with the Clinton mantra to — ”develop a strong economic message.” Message. Not strong policy for the middle-class. Message. We got messaged.

Democratic Party leadership went after the money. In the process, they played politics with our lives, just like the other party. The people have been wronged— from both sides of the aisle.

“a Democratic Party-aligned policy shop that promotes…“market-friendly” economic policies. It claims to advocate “a philosophy that adapts the progressive tradition in American politics to the realities of the information age.”

Progressive tradition? The realities of The Information Age? What? The age when we no longer trust any information without first following the money? And, the money flows to both “sides.” In a money-driven system, R or D doesn’t matter. 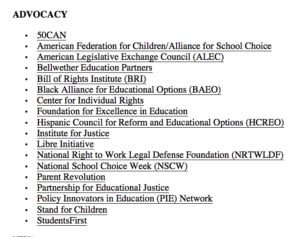 Every organization on this list is an enemy of public education. Their actions speak of standardization, privatization, and they are dismantling the public education system under the guise of “reform.”

What is important is knowing the main players in private-sector education reforms.

That’s how you know the enemy, by the company they keep.

“We outline the many overlapping connections in this echo chamber of advocacy groups, think tanks, and media outlets that are increasingly funded by a handful of conservative [and neo-liberal] billionaires and for-profit education companies — often without proper disclosure. These groups are driving the education privatization movement forward by co-opting the education reform mantle. 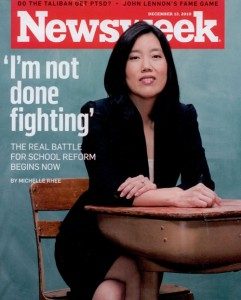 And no story about the battle over education reform would be complete without this out-sized, outspoken enemy of public education — former D.C. Chancellor Michelle Rhee.

Knowledge of the funding for her organization, StudentsFirst, was under wraps for a long time. Why is $he important?

Oh, the Billionaires Boy’s Club. Broad is connected to Rhee. And the replacement for Rhee at StudentsFirst, Jim Blew, previously  (still?) worked for the Walton (Walmart) Family Foundation. Now, StudentsFirst has merged with 50CAN. Blew explains the arrangement,…

“50Can is stronger in advocacy.”

The plan is set. 50CAN is hiring. And just to clarify how this all works…

Blew said, “We need to always assure our donors that we’re using their money as effectively as possible. We’re completely dependent on these donors.”

So the man in charge of 50CAN is Marc Porter Magee. He’s connected every which way. It’s an all-in-the-family deal with his wife, Common Core proponent, Kathleen Porter Magee, and brother Michael Magee, CEO of the non-profit Chiefs for Change. 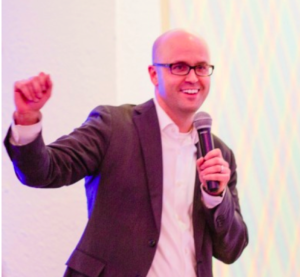 Photo of Marc Porter Magee provided by the Walton Family Foundation (an enemy of public education).

“turnover in education leadership is a problem” [he] hopes to address in his new role.”

That should be easy enough with Eli Broad (through Bruce Reed) already in the leadership building business.

Win, win —for them. What about us — the public?

Marc Magee’s 50CAN organization will be training advocates to push their agenda for education reform throughout our nation. How important is this? That’s for you to decide.

This is what the education gadfly reported.

“Progressive Policy Institute, the think tank that tried to create policies for the ‘new’ Democratic Party.”

And Magee had plenty to say for himself. He spoke of…

“the real problem we need to solve. It’s not that our urban schools and traditional districts are ‘failing.’ It’s that our traditional approach to education plateaued around the 1970s, and we’ve struggled to make meaningful progress since then.”

——–THAT IS A LIE. A distortion of facts. Our public education system was on a steady trend of improvement with a significant narrowing of the achievement gap that extended well into the 1980’s. THEN political leaders became the drivers of education “reforms.” THAT is when dissatisfaction with public schools began trending up (along with the cost$). They used us!

The truth? None of the private-sector education reforms —not standards, assessments, accountability, technology, charters, or vouchers —were ever based on facts. It was all about the information age, the knowledge economy; it was all about the money. It was never about all “our” children.

The enemies of the public education system aren’t reforming schools; they are dividing and destroying. They aren’t looking for a centrist position. They aren’t making progress on education reform. They don’t even accurately define the problem.

Real reformers understand that the battle for the soul of our education system is the battle for the belief —the promise— that we will constantly fight to overcome “separate but inherently unequal.” Only an effective continuous school improvement process can do that —within a responsive and responsible PUBLIC system.