Having begun his career in education in 1952, Marion Brady’s professional life spans not only the decades but also the rungs of the ladder of educational success. Having taught at every level as well as contributing to serious academic thought as a consultant and writer, Marion Brady IS an education expert. The following words are some of his most recent thoughts on the state of education reform in America. The addition of my own remarks will be noted in brackets [VMY]…Please consider his thoughts and the question he has for Secretary of Education Betsy DeVos…

The Darwin Award is an annual tongue-in-cheek honor recognizing individuals who’ve contributed to human evolution by removing themselves from the gene pool—doing something stupid enough to kill themselves.

If there was a comparable award for countries, the United States would be in the running. I’ll explain. 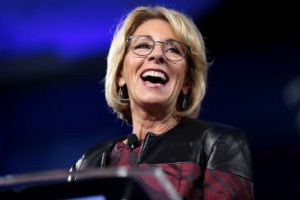 Photo of Secretary of Education Betsy Devos by Gage Skidmore from Peoria, AZ. [DeVos rose quickly to national political power over education reform through the authority given her by Congress in the Every Student Succeeds Act (ESSA). VMY]

Worldwide, the rate of environmental, technological, and demographic change is more rapid than it’s ever been, and is accelerating. If we want to maintain our way of life, we must understand the changes, manage those that can be managed, and adapt to those that are beyond our control.

Because problems can’t be solved using the same kind of thinking that created them, understanding, managing, and adapting to change require an ability to think in new ways. 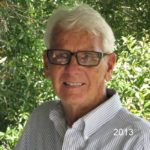 Education expert Marion Brady. [Marion climbed the ladder of success as most of us do, one rung at a time, gaining the valuable insight only experience provides. VMY]

In the 1960s, thoughtful federal education legislation and funding for research encouraged educators to think freshly, and new instructional materials in the physical and social sciences and humanities began to appear that emphasized “learning by doing” rather than merely trying to remember secondhand, delivered information. The materials went by various labels—“inquiry,” “discovery,” “active learning,” and “constructivism.”

Unfortunately, that departure from traditional expectations generated a “back-to-basics” backlash. Leaders of business and industry high-jacked the backlash and used their clout with federal and state politicians to engineer a souped-up version of traditional schooling. No Child Left Behind, the Common Core State Standards, Race to the Top, and high-stakes standardized tests, brought back traditional schooling’s emphasis on learner ability to merely recall (and sometimes) apply existing information.

The business and industry-initiated reforms didn’t just bring back an emphasis on memory work to the neglect of all other thought processes. Progress, today’s policymakers say, has to be “measurable.”

Kids, teachers, administrators, schools and school systems must be sorted and ranked based on standardized test scores.

The “measurable” fad has made meaningful education reform impossible. The measuring is done by machine-scored standardized tests that can’t evaluate complex thought, can only count correct or incorrect answers. Questions that appear to require thought are really guess-what-the-writer-of-the-test-item-was-thinking. That’s a skill, but not a particularly useful one in the real world. 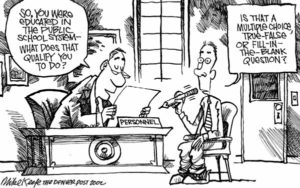 Today’s test-based “reforms” are preparing the young for what was, rather than the world as it is and is becoming. That isn’t just stupid, it’s a recipe for societal disaster.

*Those responsible* for the reactionary policies that continue to block the use of teaching materials requiring the continuous use of complex thought processes owe America a satisfactory answer to a question:

The pursuit of life, liberty, and happiness requires the routine use of myriad interdependent thought processes too complex and idiosyncratic to be evaluated by standardized tests.

—given the cost to taxpayers of those tests—

—given the time devoted to preparing for them—

—given the life-altering consequences of their scores for learners, teachers, and schools, and

—given their role in perpetuating intellect-limiting conceptions of learning—

why is it not morally unacceptable, ethically indefensible, and practically unwise to continue their use?

If a satisfactory response isn’t forthcoming, those who take seriously the responsibilities of citizenship will encourage and support the “opt-out-of-testing” movement.

[ Traditional versus “Inquiry”: Was it possible for those camps to coexist within a more balanced system? What if? But now, now we must stop the bleeding. ASK for your representatives to ANSWER the question. If you get no response, refuse to allow your child to be part of the test-based “measurable” fad. Refuse all forms of commercially developed standardized testing. Opt Out.)