To understand why I came to this conclusion, it’s essential that people clearly understand the words used in official documents.

“State assessments” means Common Core assessments unless otherwise designated. “College and Career Ready” now means Common Core aligned. “Local control” means control over what local people are allowed to have input on after the schools have complied with federal and state laws. Your local school board? That is another topic.

“Autonomy” in the face of a system controlled by profiteers working the political strings means nothing.

Think about it. Outreach to the parents and the public to “increase awareness”? Alright. Plot to align Common Core Standards to curriculum, assessments, policies, budgets, college admissions and financial aid? The initiative was about more than national standards.

And we can’t forget accountability. “Accountability systems” are brought up repeatedly. But, what does that mean?

Ask the architect of Common Core, David Coleman. When he was the head of The Coalition for Student Achievement group, there was a gathering in Washington D.C. to decide how to use OUR American Reinvestment and Recovery Act dollars. In addition to common standards, it was decided that “…at least 50% of teacher ratings…” should be based on “academic progress.” Many state policymakers jumped aboard that train.

If teachers are “rated” individually by student progress on Common Core aligned assessments, don’t we have to do these assessments at least twice a year to measure real growth due to a teacher? Double the testing money?

But when this group left their little meeting in D.C., it was the Council of Chief State School Officers (CCSSO) and National Governors Association (NGA) who brought this “initiative” forward as “state-led.” Here’s the BIG GUN in the Common Core plan.

They call it their “new deal.”

Once revisions to ESEA (currently called No Child Left Behind) are put in place, it will be extremely difficult to change. My proof? No Child Left Behind was due to be rewritten in 2007. It didn’t happen even in the face of knowing with certainty that it was detrimental to a generation of already under-served children. Change? Outcry? Action? By the People, yes. By Congress? Not soon enough.

If CCSSO and NGA are allowed to be leaders of the pack on ESEA, one principle upon which this law will stand for another decade is that ESEA will “set the baseline for state policy (in assessments, accountability, consequences, etc.)…”

Thus far, it appears these ideas are leading Federal and State “leaders.” The House Student Success Act (H.R.5) still mandates yearly “state” testing and now shifts “accountability” and teacher evaluations to the State. The draft Senate version applies the same “guiding” principle. This policy ping-pong (partnership), I’ve seen played before when outcome-based education hit the States before being federalized in No Child Left Behind.

So, will the federal government set “baselines” or “just” require federal approval of all state plans? Will federal law mandate that “All accountability systems includes student academic achievement and growth”?

Is federal law being used to uphold a very controversial private/somewhat public partnership “initiative” that the majority of the public did not know was being put in place? 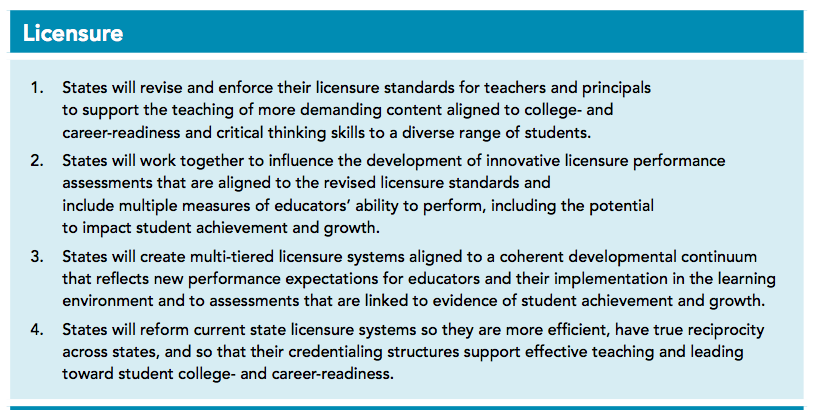 The addition of “critical thinking skills” has been a major selling point. Working to encourage children to think critically is nothing new to education.

But back to our teachers and include school leaders as these familiar groups did.

CCSSO, with their buddies at NGA, wrote Our Responsibility, Our Promise that aligns all teacher and principal development with the Common Core. These are two non-governmental trade associations. Don’t you think the preparation for teachers and school leaders FOR PUBLIC SCHOOLS should be based on the standards and principles upon which WE —the public— want, believe, stand upon, respect, and trust to guide us well?

When the people behind the development of Common Core and the Core plan decided to transform the system to do their bidding, they needed to set the agenda in motion, drive adoption throughout the system, and accelerate results through divisive action especially if they felt the need to get this done while the Great Recession had the public’s attention.

There are people who see the Common Core standards as just standards because of the “facts” they have heard.

Please stop and ask that person that is so passionately fighting against Common Core what it is that stirred their passion. Please stop and listen to them. Will they mess up some details? Chances are they will because the truth has been hard to find.

But ask yourself, are these “just standards”?

Teachers, are you sure you know what “they” have planned for your profession?