To mandate the use of standardized testing “not in accord with the standards of a profession” is driving unethical testing practices. Ignorance on this manner is no excuse. Stupidity of the drivers of “education reform” is not acceptable. Outright political, monetary, and ideological motives of those pushing yearly standardized testing — in federal law — stinks to high heaven.

Where is the leadership on testing?

Ethical testing-industry professionals follow a code that provides guidelines for what is considered “fair” including “the recommended uses” and the necessity for understanding “the strengths and limitations of the test” (Code of Fair Testing Practices in Education, 2004). THAT is not what this country is doing.

In the thirteen years of federally mandated yearly standardized testing, did testing prove itself to be worth the time, money, and effort? PROOF? What proof?

We hit the mark – “proficiency” scores inched up. End result? Scores without skills. NCLB was changed to ESSA but the MANDATE for unethical testing stayed in federal law.

If a practice is “not guided by or showing a concern for what is right,” then by definition, it is unethical. Unethical testing was allowed to go forward and be perpetuated through both state and federal laws in a game of policy Ping-Pong that mesmerized the public and lulled them into agreement. 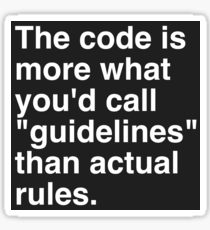 Isn’t it time to follow a Code of Ethics in education? Isn’t it the expectation we should set for all education professionals?

It’s amusing when a fictional pirate makes light of a code of ethics; it’s not at all funny when ignoring the Code of Fair Testing Practices in Education limits your child’s opportunity to learn. Limits on the curriculum were a direct and indirect result of unethical testing mandated by federal education law that cemented the practices in place for 13 years under No Child Left Behind. (Longer now because the unethical testing went unchanged when NCLB morphed into ESSA.)

The focus of No Child Left Behind yearly standardized testing in math and language arts was the pinnacle of the problem with that law. It is not changed in the Senate version called “The Every Child Achieves Act of 2015.” The Senate vote is set for April 14th.

The consent of the People is in our silence. If the idea of “unethical testing” is unfamiliar to you, you are not alone. Ignorance is more common than stupidity or corruption. But ignorance can be fixed. So can federal education law.