About the Rhee Opinion of the Opt-Out Movement: [NOTE: if you are not familiar with the Rhee agenda, 2012 critique from Idaho view provided here] 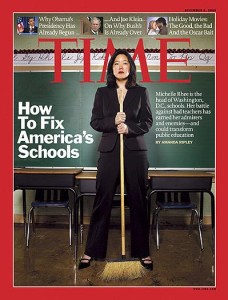 First, let’s clarify “standardized tests.” A standardized test is any form of test that (1) requires all test takers to answer the same questions, or a selection of questions from common bank of questions, in the same way, and that (2) is scored in a “standard” or consistent manner, which makes it possible to compare the relative performance of individual students or groups of students. (From the Glossary of Education Reform – who knew?)

O.K., so then, I’m going to make an assumption that confusion has occurred.

I see standardized tests in two different lights. In many of my large classes in college, college professors wrote up multiple-choice tests (fill in the bubbles), which covered the material they taught or that they expected students to learn, and ran them through machines to score. Those are “standardized tests” by definition but I’d call them “internally developed.”

It is not really “standardized tests” that parents are objecting to; it is externally developed standardized tests that are being misused and their worth is being misrepresented to the public with scores being used for propaganda purposes.

Ms. Rhee is wrong in thinking that externally developed standardized test scores are “critical to improving public schools.” The only period of time during which this country was actually narrowing the achievement gap (judged by standardized tests pre yearly mandated) was the period when the original “Effective Schools Research” was done. External tests were not correlates of those schools. External tests did not improve those schools.

Ms. Rhee is wrong in thinking that “better” design of external tests will “measure how well our schools are teaching our children.” These tests cannot distinguish between a test prep curriculum and the one that is best for the individual student. They cannot accurately judge the quality of a whole school. Study James S. Coleman’s work more closely, Ms. Rhee.

The Sandia National Laboratories exploration of education that provided “Perspectives on Education in America” (Journal of Educational Research May/June 1993) explained our seemingly poor international performance based on several “issues.” To really judge our U.S. students based on these tests, we would need to take into account many more factors than the average Jane or Joe “education think tanker” is going to do… So we shouldn’t be basing our decisions on these tests unless we are going to delve into differences in student tracking, curriculum timing, cultural differences, etc. The Sandia brain trust concluded, “…the utility of these assessments to educational improvement in the United States is negligible.” Ms. Rhee, read their work – these were some damned smart people!

So, in general, to continue on the path of test-based reform is barking up the wrong tree. Standardized tests are a monitoring device that we should use sparingly and with cautious interpretation; they should not be the foundation for education reform that they have become.

If the argument I present here gets a hearing, it is only because of the Opt-Out Movement ——- Move on! Let’s hear more!

Slaves to the test?

And halt the confusion. Ask for clarification from the bully pulpit. Sign the Ohanian White House petition.

(Update 10/8/14 —- The petition failed to get enough signatures. So, sadly, the need to end the federal role in yearly mandated high-stakes testing lives on through No Child Left Behind.)

(UPDATE AGAIN – As of 12/4/15, the yearly mandated high-stakes testing lives on through the Every Student Succeeds Act – NCLB 2.0. THIS MEANS that everything written about NCLB still applies.)