The modern-day march towards equality has always been — at least partially — about public education.

When educational inequality was studied by James S. Coleman, they used tools —surveys and tests— to determine outcomes. And those that saw equal educational opportunity being established in high-minority and high-poverty schools looked further into the means by which educational quality was being improved.

Since researcher Ronald Edmonds and others made their observations known, no one has been able to definitively dispute them. The correlates for effective schools have been expanded; they have been rewritten and renamed; they have been reorganized and re-researched — and they stand as guiding principles.

Edmonds had followed in the footsteps of the leaders of the community school movement. Father of the concept, Frank Manley, drove the idea as far as he could and handed it over to Frank (Francis) Keppel who wrote the essence of it into law as best he could. 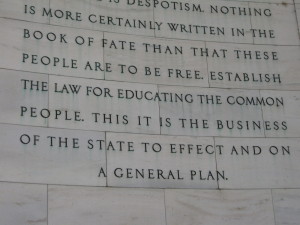 Jefferson’s express of the need to educate the common people.

Now, we stand at a crossroads in education law. What principle will we stand upon in order to do right by the children of this country? Will we side with what has proven itself effective, or go with what so many desperately want to make “work”? Will we repeat mistakes of the past only to discover it leaves children behind? Or will we travel the hard but proven path of equal opportunity?

Does a rising tide lift all boats?

It is only when you stand on the shoulders of giants that you can see what they saw. Understanding the concepts of standards, testing, community education, and the personal and shared responsibility of educating a nation of children is the ladder that can take us high enough to see the best way.

The opportunity we have now is to use the law —the reauthorization of ESEA currently called No Child Left Behind— to put in place the foundational principles of equal educational opportunity, the principles of effective schools.

Part 9 of ten blogs on The Road to Educational Quality and Equality that started with The March Begins.