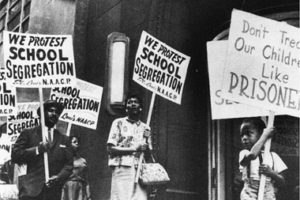 The first take-away fed the “funding has little effect on achievement” argument and the second led to forced busing to racially integrate schools, which produced the unintended consequence of “white flight.”

The overlooked or forgotten finding was this:

The “pupil attitude factor, which appears to have a stronger relationship to achievement than do all the school factors together, is the extent to which an individual feels that he has some control over his own destiny…”

What happens in schools and communities matters. School climate and culture matters.

Keep reading The Road to Educational Quality and Equality that started with The March Begins. Next up, Still Searching for Solutions?

3 thoughts on “Inequality Was Studied”