Will we one-day look back and wonder why we let Big Data devour our children’s lives in bits and bytes?

Will we scratch our heads in confusion over why we let data become a major driver in so many aspects of our lives? 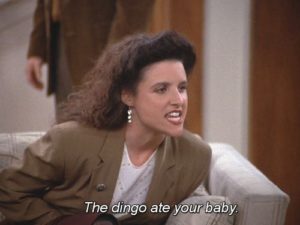 Surely we can see that the tech giants are profiting while the greater society suffers? Maybe not.

But we do know that Americans care about their own right to privacy.

“The issue of who is gathering information and what information is being gathered is considered to be an important dimension of privacy control by nearly all American adults.” Pew Research Center  (Views About Data Collection and Security)

But I wonder, why don’t Americans care about protecting children from the BIG DATA Monster?

When the biggest concern directing the nation is the workforce/military supply-chain for the global economy, it makes perfect sense to allow the tech industry to have access to all education, health, employment, and income records. And what could go wrong with that?

What the data breaches mean for children and families may not be immediately apparent. SOURCE of statistics: Data Breach Statistics

But the economy — the development of a global workforce — isn’t what we people see as our most important problem. Actually, dissatisfaction with government is the problem most important to us.

So Americans are not sacrificing children to the Big Data Monster because of the economy. …  We just don’t care enough about education. Honestly, we care more about other things. And in way too many towns and cities, schools have become distanced from the communities in which they are located. Education may not be seen or treated as “a community cause.” This is what we care about… 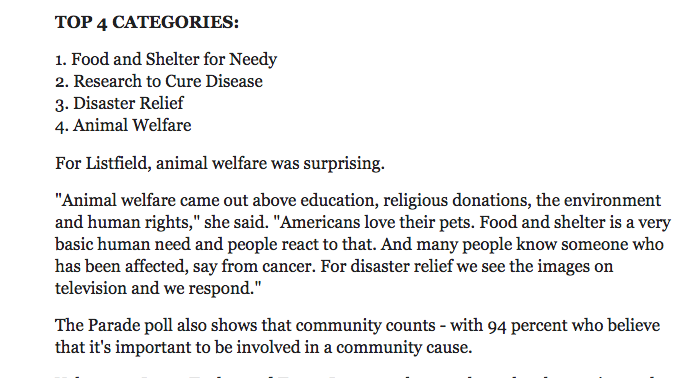 SOURCE: CBS News, What Do Americans Care About

So let me put it to you this way.

We are a nation up to our eyeballs in debt. State financial situations vary.

When money is spent that profits an education industry rather than individual children, it’s a double whammy. That money cannot be used for the things that Americans do care about and lack of money for essential educational resources does negatively impact children. But politicians and business leaders see things differently.

This was a meeting of the nation’s governors (NGA) and business leaders. Source: Achieve archives

To say back then that technology is a great education equalizer was pure speculation. Now, it is propaganda.

Decades ago, those seeing the “standards, testing, accountability, and technology” package as a costly ruse were seen as conspiracy theorist. But since then, two major theories became reality: children in the public education system are being looked at as  the human capital for supplying our military and workforce AND the technology industry is driving up the cost of education.

From Insidious To Obvious

The talk of human capital development for the global workforce is commonplace. 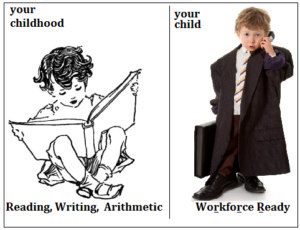 Sure, it happened slowly, at first. But bit-by-bit laws and rules moved us to adopt the idea that using the public schools for the sole purpose of workforce training was the best thing “for those kids.”

But when did tightly monitoring the workforce pipeline become the primary and acceptable function of the pre-K to college-or-career education system? 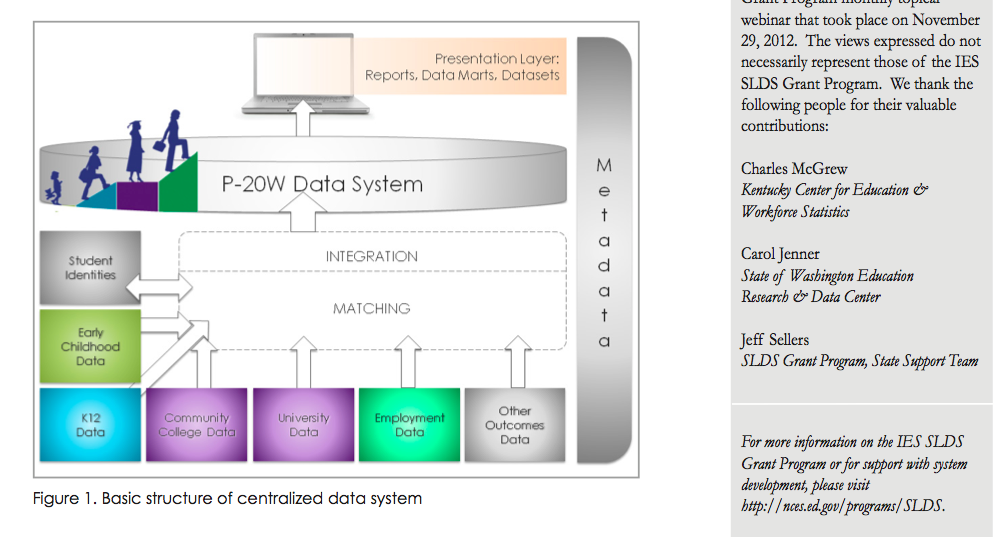 And when did it become the federal government’s duty to centralize and control the sharing of every citizen’s “data” from birth to career?

Once the country invested BIG MONEY in propping up Wall Street during the Great Recession, then it simply became a matter of working quickly by making damn sure the public didn’t hear what was happening.

Without regard for Americans wanting to know “who is gathering information and what information is being gathered,” officials felt it was more important to rush information gathering systems into place. To hell with the Family Educational Rights and Student Privacy Act (FERPA). And a Memorandum of Understanding (MOU), a written agreement to share personal information between departments of government was good enough and quick enough to put the pieces in place. ….. No outcry from parents? Who knew?

FERPA was NOT changed for the better as anticipated in 2011. So where FERPA once required parental consent to collect student data, now this “Privacy Law” allows sharing of data with THIRD-PARTY PRIVATE PROVIDERS and researchers — without parental consent OR notification. FERPA is not protecting students from digital data collection and sharing. Are we to believe that any of us will fair better?

The Data Quality Campaign is supported by the Bill & Melinda Gates Foundation and managed by the National Center for Educational Accountability (non-profit, business-minded, TX group). … Add in Common Core National Standards, the Common Education Data Standards (CEDS) and the Workforce Data Quality Campaign. … and the education/labor system “links” together without our consent … through the use of MOU’s.

And data was further exchanged between states in various programs across the country. 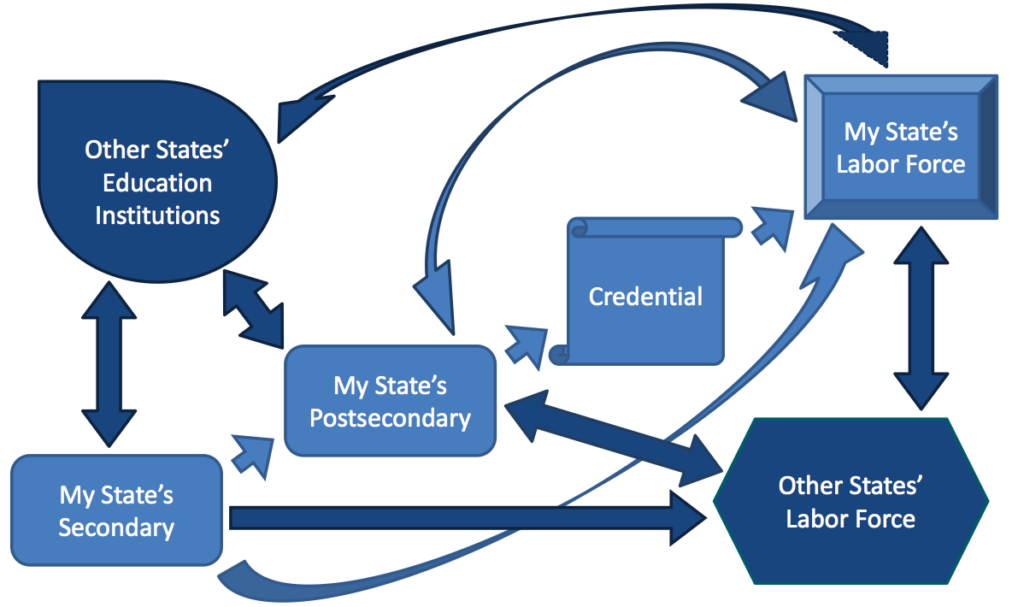 But Don’t Stop at Linking A Few States Together: Go Big!

Bring in the feds! Just like our federal government was used to push through the state longitudinal data systems, a Workforce Data Quality Initiative (WDQI) went forward “for customers and stakeholders of the workforce system.” 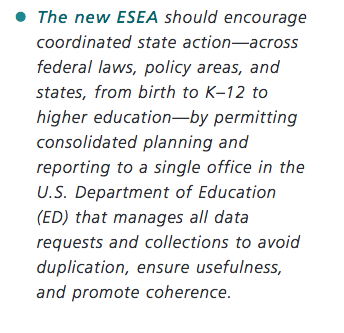 “Ultimately”? Well, ultimately the plan was always to centralize all student data.

But when it didn’t work to get Big Data collection into education law (ESEA), Speaker of the House Paul Ryan and Senator Patty Murray (possibly with a little push from the Tech Giants?) devised another way. They started with authorizing a commission to study how the feds should collect, secure, and share “evidence.”

Three years later, the commissions report is final. The Foundations for Evidence-Based Policymaking Act is written, sponsored, co-sponsored and being fast-tracked through Congress. Speaker Ryan appears to be following the conventional wisdom of “Do not engage in large-scale, open forums.” He doesn’t think it even needs a roll call vote. Just pass it. 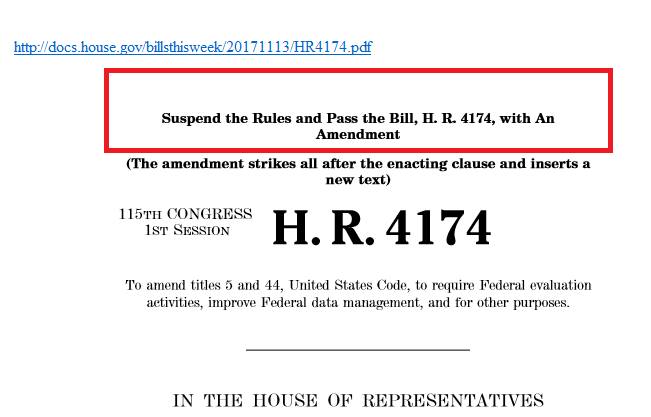 Supposedly this move to collecting, sharing, and linking massive amounts of data at the federal level is required in order for Congress to make good policies. And they have plenty of swamp land for sale also!

Do they need more data to know WE ARE IN DEBT? Do they comprehend what it means to the federal BUDGET to require ….

We think it is essential RIGHT NOW to push for more data centralization so more data security is required from the federal level?

I think we can all see how some people might benefit.

BIGGER the data base, BIGGER the risk. …. but BIGGER the profits in the tech industry to fix a problem of our own creation. And the reason for the law makes no sense. 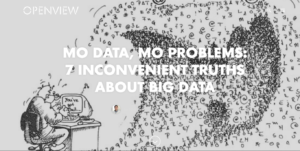 Congress has not demonstrated any ability to use the evidence we already have. And they have broken the public trust repeatedly.

Maybe society doesn’t care about parents and children’s privacy rights, but this law is set to affect us all. And, we will never fix our BIGGEST problem if we continue to allow lawmakers to make laws without our knowledge and therefore without our consent. 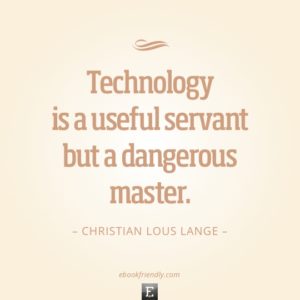 For the sake of all Americans, contact your House representative today (after 11/15 could be too late). Tell them to vote “NO” on H.R. 4174. Phone 202-224-3121 for the main switch board or find your House members direct phone number here. (UPDATE: The HOUSE pushed it through without a roll call. CONTACT your Senator and the Senate Committee on Homeland Security and Governmental Affairs where the bill is currently 1/16/18.)

Tell Congress that privacy matters and for the sake of children, FERPA needs to be restored. Childhood needs to be preserved. Children need to be protected.