In the midst of our Coronavirus Crisis, President Trump and Education Secretary DeVos are playing a dangerous political game.

Gambling on parent’s desire for their children to go back to school, Trump and DeVos are pushing for in-person instruction this fall in all schools. But they have no authority over that decision. So why would they make the demand?

From the Daily Beast: “Trump Banks on School Reopening to Help Him in November”

“Donald Trump’s aggressive push to fully reopen schools this fall is being driven by a belief inside the president’s orbit that the policy will be a political winner for him this November. Their confidence, they say, is backed up by the campaign’s private polling data.”

“It’s unclear if Trump’s gambit—aimed largely at suburban female voters and moms—will work in his favor. …”

Yes, we know the president only has his eyes on re-election. But we should not think the  appeal is aimed at just suburban women. Opening schools appeals to every single-parent working without support at home, the working-poor couples that can’t afford daycare, and all those still not seeing COVID-19 as a real threat.

“President Trump understands … that we need to get children back into the classroom so they do not fall behind …” said Trump 2020 spokeswoman Samantha Zager in a statement to The Daily Beast … , adding that …

… “Joe Biden puts his loyalty to the teachers union ahead of the well-being of students and families in America.”

How many times has DeVos said her school choice “freedom” agenda is about “funding to students …not institutions… not systems”? How many times have we heard we must “catch up”? “We’re falling behind.” “Leave no child behind.” —It’s a crisis! —Jump on the bandwagon!

You get the picture. 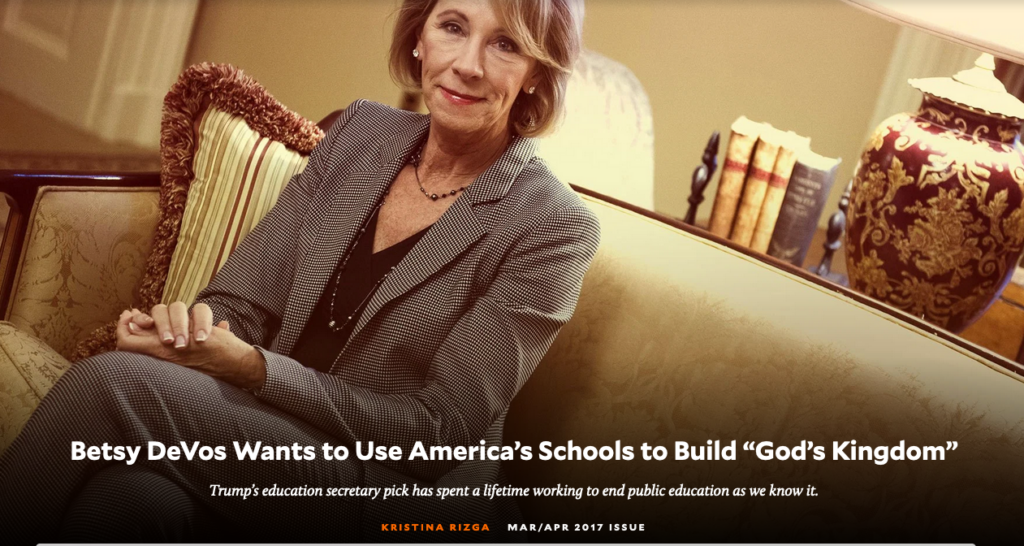 So —given the obvious— what makes this such a dangerous political move and for whom?

Did you notice the prepared statement released by the Trump campaign included this jab?

Battle lines were drawn. And, the public’s attention was drawn to this story while media coverage of the continued protests of Black Lives Matter went on a back burner. Distraction politics works for both Trump and DeVos.

And with some voters, setting up a fight with the teacher’s union wins political points. But Trump and DeVos are merely pulling that “back-channel strategy” out of an old hat full of political tricks. Back in the 80’s, Lamar Alexander (then TN governor) hatched the anti-teacher’s union strategy to push teacher “career ladder” (pay-for-performance) policies. 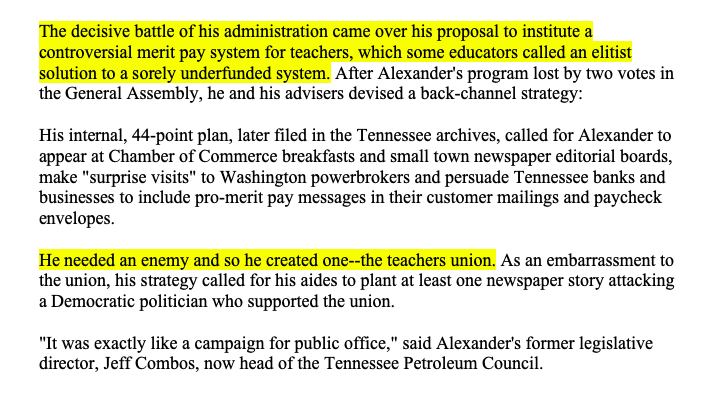 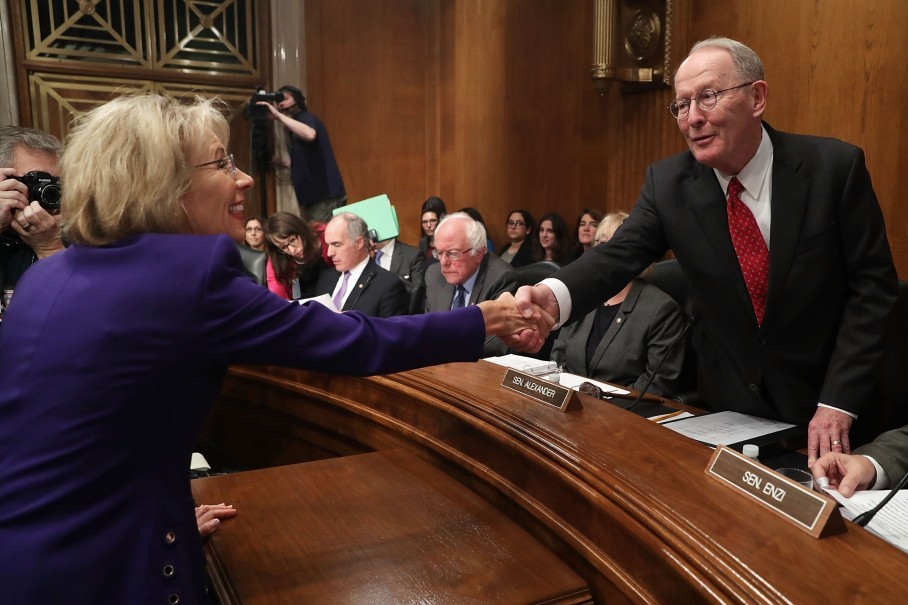 Then There Is The Matter of Money

So in addition to using the familiar ploys of distraction politics, “putting students first” and setting up the teacher’s union as the bad-guys, this “open-all-schools move” brought in the money follows the student theme —effectively making some people hesitate — stop and think.

From The Hill: “Chris Wallace presses DeVos on threats to withhold funding from schools that don’t reopen”

“Look, American investment in education is a promise to students and their families. If schools aren’t going to reopen and not fulfill that promise, they shouldn’t get the funds, and give it to the families to decide to go to a school that is going to meet that promise,” [DeVos] said.

This dangerous political game appeals to individuals not truly focused on “America” —the country— our country as a united nation. DeVos twists the nation’s ideals and principles making her dogmatic views sound appealing. But she has it wrong. American investment in education is in a system of public schools capable of delivering on the promise of universal education. It’s not about a student; it’s about all students.

Wallace disputed DeVos’s comments on withholding funding, … [and went on to say] …

“I know you support vouchers, and that’s a reasonable argument, but you can’t do that unilaterally,” he added. “You have to do that through Congress.”

DeVos answered by saying the administration is “looking at all the options.”

Chris Wallace (like how many others?) acknowledges DeVos’s argument as reasonable, at least on the surface. But, will people dig beneath the surface to find that charters and vouchers fail to deliver on the real promise of American education? Trump and DeVos are gambling that people won’t dig deep.

What are the odds?

And Wallace was right about the need for Congress to approve voucher-funding language in another corona relief bill. Stop and think.

When the DeVos team is “looking at all the options,” does that mean they are looking at existing loopholes in the existing laws, or looking to create new ones? Will anyone in Congress recognize new loopholes if a new relief bill comes forward? Did they see it coming in the relief to “small businesses”? To education? 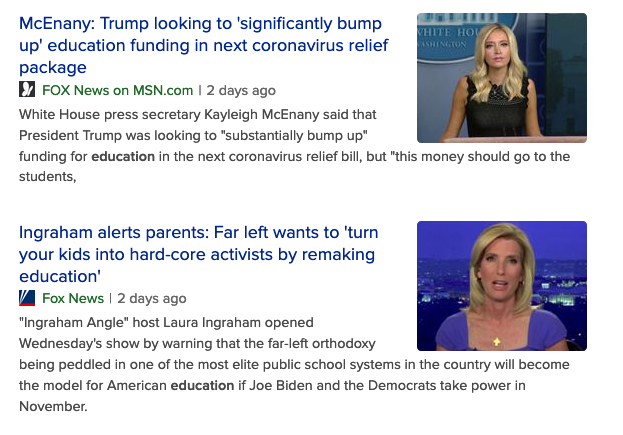 Some private institutions supporting charters and vouchers are already accelerating marketing of the idea of ten children in a classroom, which they never did for traditional public schools. How appealing will their plan be come mid-October? 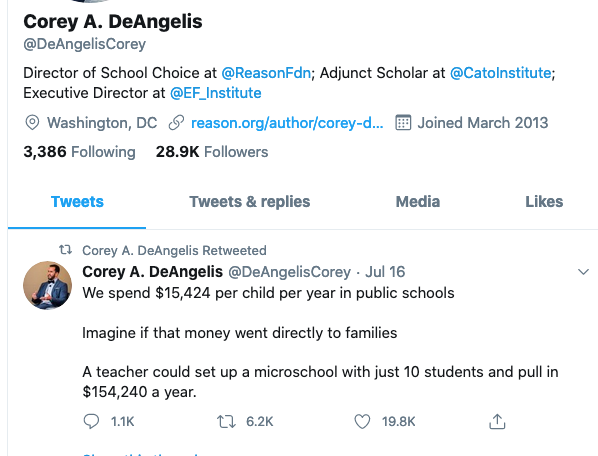 From TruthOut: “Charter Schools May Have Double-Dipped as Much as $1 Billion in PPP Loans”

“… Education Secretary Betsy DeVos awarded to 10 charter management organizations in April, weeks after the PPP was passed, to “fund the creation and expansion of more than 100 high-quality public charter schools in underserved communities across the country.”

That’s additional funding, the double-dip, the set-up, through the use of multiple laws (PPP plus ESSA). But this is only the tip of the federal charter school iceberg. There is a billion wasted here, and multi-billions spent there on this federal 1994 “program” that has not advanced the nation towards educational equity.

“Charters also make appeals under the aegis of ‘school choice’ to students in underserved school districts. Though many charters deliver on promise of higher quality education, others have not, and some of those that do have been accused of siphoning money from public districts that need it the most.

For these reasons [and others], charter schools are seen by some as an existential threat to public education.” 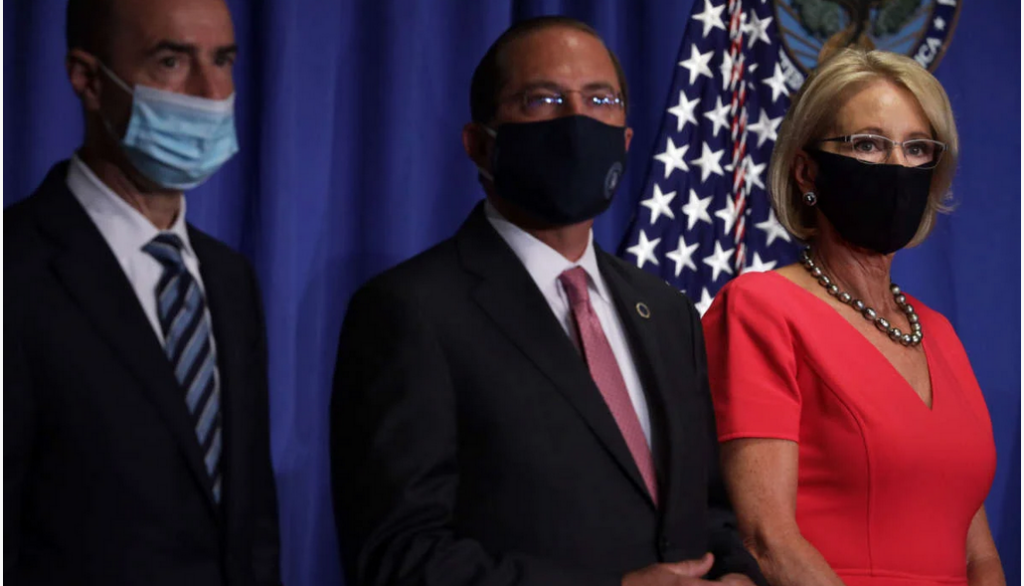 The Threat Is Real

While push-back against the Trump/DeVos demand to open all schools is prevailing, we won’t know how it fully plays out until November. But the bigger danger is in underestimating the stamina, determination, and political will of voucher proponents. We can’t afford to be recklessly short-sighted.

Those wishing to destroy our institutions are in this dangerous political game for the long-haul. Trumpism is a force. It is a danger to us all.

“Most importantly, we will need to remain vigilant … [and know this] … hope and prayer must be augmented by decisive action.”

The coronavirus pandemic is our newest wake-up call. But instead of listening to the call from our political leaders, how about listening to others? 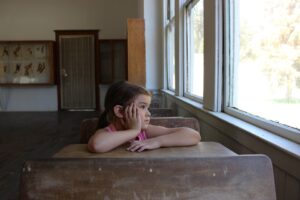 This is a wake-up call for the nation from Laura Bowman, Parents Across America Board Member.

We need to focus on what’s truly important for our children.

What is important is their face-to-face interactions with caring, experienced, human teachers. It’s ensuring they have what they need in their homes and communities, so they can better succeed in the classroom. It’s fully and fairly funding our public schools so they’re ALL well-staffed and well-resourced.

You are seeing why so many of us have been saying the following: 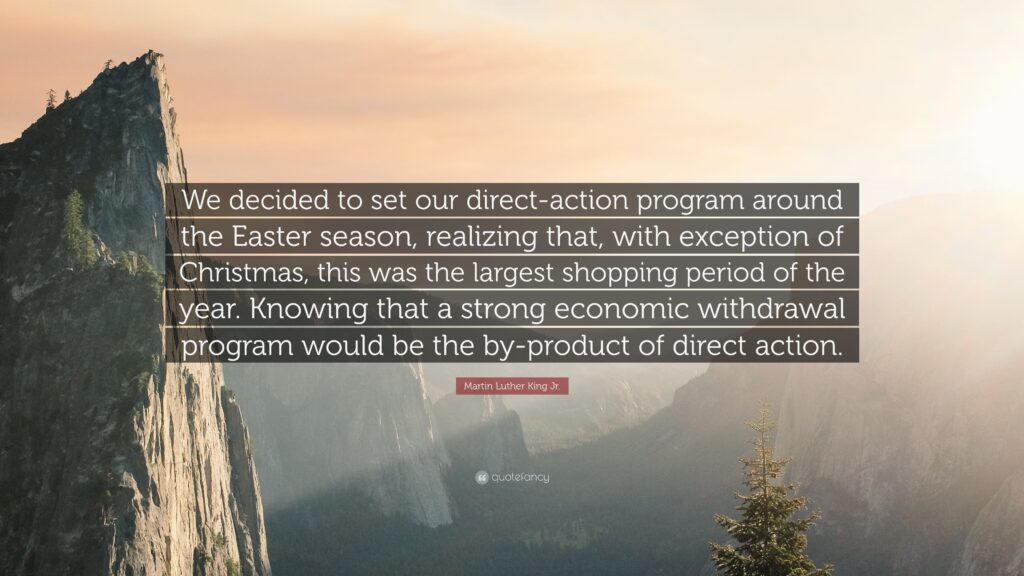