Flotsam is the wreckage of a ship or its cargo, worthless things, unemployed people.

Jetsam is that part of the cargo thrown overboard to lighten a ship in danger.

The only reason I looked those words up in a dictionary was because Martin Luther King, Jr. hit a chord with me when he spoke these words: “I refuse to accept the idea that man is mere flotsam and jetsam in the river of life unable to influence the unfolding of events which surround him.” Nobel Peace Prize acceptance speech, 1964

And knowing that the “March on Washington” in 1963 was organized to urge Congress to pass John F. Kennedy’s civil rights bill calling for equal opportunity in employment and education, I have thought long and hard about the children in this country being treated like flotsam and jetsam.

I know MLK was more focused on the unemployed adults at the time that he spoke those words, but children are people too, and much less likely to be able to influence events that can engulf them and take them under. They need us so desperately to do the right thing and stop ignoring the challenges they face that we can influence.

The March is Unfinished. 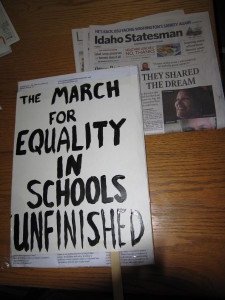 The poster says it all.

Today we celebrate his birthday of January 15, 1929. And many of his words will forever be recalled. But words are not enough.

“Let us move on in these powerful days, these days of challenge to make America what it ought to be. We have an opportunity to make America a better nation.” April 3, 1968

3 thoughts on “Words Are Not Enough”