Opting out of state tests means: You are using an effective tool to fight the unethical use of standardized testing that has, for decades, hindered real progress in providing equal access to quality education in America. 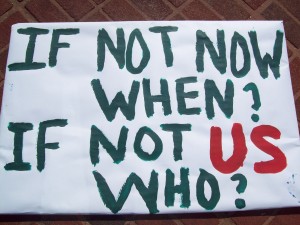 When significant numbers of parents opt their children out of testing, they are statistically invalidating an already faulty judge of the quality of education.

What do we know to be true?

Yearly assessments don’t need to be of the external, commercially developed standardized variety to determine how well individual children are doing, and whether schools are meeting the needs of all students. We have better ways of making those judgements.

It was never appropriate to mandate yearly standardized tests under the pretense that it was for the good of the student and was to better inform the parent.

Personal aside (I just have to share my observations): Having moved from one area of the country to another, I observed regional differences for myself. “Pop” or “soda”? “Couch” or “sofa”? It seems simple enough for we adults to use words interchangeably but when young children have a limited vocabulary, it can make a big difference on tests that were written by some adult in another region of the country, or world, who unknowingly creates a testing bias. What do you call the mid-day meal —lunch, dinner or supper?

Test Bias or Cultural Bias: Have We Really Learned Anything? by Stephen J. Schellenberg

Data from commercially developed standardized statewide assessments don’t provide the “valuable” information the public has been led to believe by marketers. Policymakers have been misled. The Code of Fair Testing Practices has been broken. The truth is that even “the SAT, a high-stakes test with significant consequences for the educational opportunities available to young people in the United States, favors one ethnic group over another.” But many states are now paying for every student to take these tests.

To base school and education policies on standardized test scores is inappropriate. Teachers who base their strategy with individual students in the classroom on a narrow set of results are more likely to be “off target.”

SOURCE: W. James Popham, Ed.D. is the author of Testing! Testing! What Every Parent Should Know About School Tests (Needham Heights, MA: Allyn and Bacon, 2000).

What happens when you opt out?

Parents who are choosing to opt their child out of assessments are:

Share United Opt Out with your friends to spread the word.

What does the civil rights community have to say about assessments?

In May 2015, a dozen large national civil and human rights groups united in opposition of opting students out of annual tests. The media covered that story widely beginning in January. The stage was set for the marketing and political plan. 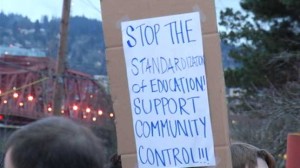 The same level of coverage did not occur when over 200 civil rights and other community organizations signed a letter in July opposing the yearly high-stakes testing that continues to be central to the governing philosophy of schools under No Child Left Behind and is currently being continued under its reauthorization (ESEA, The Every Child Achieves Act, Students Success Act).

Under No Child Left Behind, parents with children in schools at the time of its 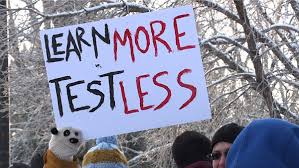 implementation NEVER had their objections heard as our schools were made to conform with a law that infringed on our children’s individual right to a proper public school education as defined under our own state constitutions. We were denied our right to participate in decisions concerning our children’s education and many of our children suffered the effects of a curriculum narrowed by law. We were ignored while children, particularly in impoverished communities, were left further behind.

As a parent why should I opt my kid out?

I encourage all parents to help improve their own schools by educating other parents and educators. Many teachers themselves were schooled under the dictates of a standardized system and many administrators were indoctrinated into the test-based philosophy of No Child Left Behind. They don’t know any other way and, to date, most have not been willing to listen.

They will listen when they are forced to acknowledge strong opposition to high-stakes testing. Negotiations across the country over the last three decades have failed to stop the standardization and privatization of our public school system.

Opt Out, Refuse, Boycott the tests to send a message that cannot be ignored.

Help your country get back on the right path. 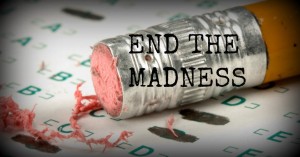