Turning Point USA fits the criteria of an astroturf — fake grassroots — organization. But what makes them a real danger are three things: their strategies, target audience, and mode of operations. Even real Republicans have warned about this far-right danger. It behooves us all to take note!

Turning Point USA (TPUSA) began with the discovery of a charismatic young speaker named Charlie Kirk by Tea Party activist William (Bill) Montgomery. Through Montgomery, Kirk became further connected to the influential and well-to-do. Together they launched TPUSA in 2012. Montgomery left TPUSA in April and recently died due to COVID-19.

“In Kirk’s telling, he started the group in his parents garage as a teenager in Chicago and grew it to be a powerful political force through sheer grit and hard work.”

Discrepancy? Or deception? Your call. 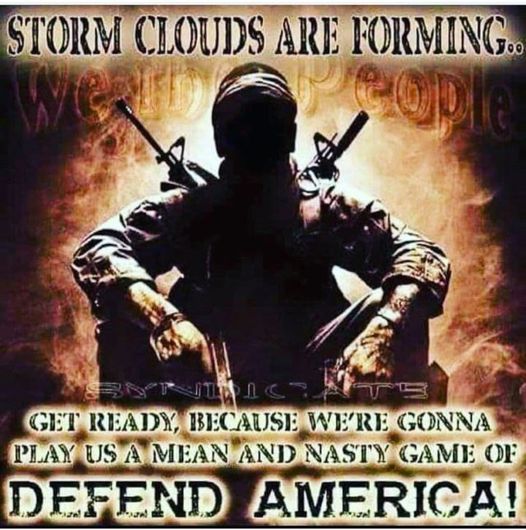 “The Storm Is Here” is a QAnon rallying cry. Another slogan is “Where we go one, we go all” thus the hashtag #WWG1WGA

First, breathe. Politics is out of control. But knowing the truth about America’s current power struggle is the first step towards gaining back control of our country. It starts with understanding the rise of people like Charlie Kirk and organizations like Turning Point and QAnon (dots in need of connecting). Start by considering what others fear.

“Today’s politics and social tensions are dominated by three fears: fear of other social groups, fear that those other groups are encroaching on one’s territory, and fear that the state no longer has the ability to protect the people.”

Those fears underlie Turning Point’s strategies. But the strategies are not new. They’ve been used historically and have worked well for President Trump — to date.

“Trump’s aim is to incite fear—fear of violence, disorder, change—and to paint himself as the bastion of law and order.”

BUT “things do not have to get worse.”

“… there is still time for political leaders—locally and nationally—to calm the storm, douse the flames, and stifle the violent provocateurs across the spectrum…” Is America in the Early Stages of Armed Insurgency?

After launching TPUSA, Charlie quickly rose through the Trump ranks.

“By the time the 2016 election rolled around, Turning Point was a well-funded outfit and Kirk had become increasingly influential. He met Donald Trump Jr. at the GOP convention that year and glued himself to the president’s eldest son.” USA TODAY

In 2018 the Washington Examiner dubbed Charlie “Kid Trump.” The title fit! But it wasn’t simply due to Charlie’s efforts. He already had much in common with Donald J. Trump. Charlie shares a similar background — he’s from a “well off family”— and both operate similarly in keeping their dealings under-wraps.

Kirk’s TPUSA is a tax-exempt 501(c)(3) and as such “may not be an action organization (may not attempt to influence legislation & may not participate in any campaign activity for or against political candidates).” But Charlie Kirk walks a fine line and few will calling him out when he crosses it. 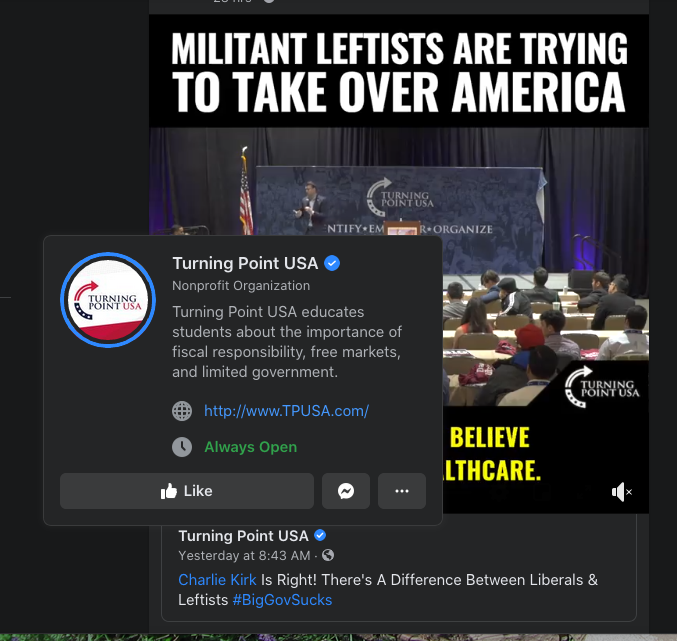 TRUTH: According to the FBI, militants on the radical-right have committed more acts of domestic terrorism. QAnon members included..

TPUSA targets 18-24 year olds (and the larger millennial voting block) with anti-government, anti-leftist propaganda. In the process, Charlie effectively campaigned for Trump in 2016 and has never stopped.

“Don Jr. came in and announced, ‘If it weren’t for Charlie Kirk, my dad would not be president of the United States today.’”

You see, Charlie is “the hook” at TPUSA meetings, conventions, and social media blitzes. His job is to fire-up the crowds. He is a provocateur.

“Charlie Kirk … has made it his business to ‘own the libs,’…”

“Own the libs” is slang for “triggering the liberals” into reacting. It’s one of Charlie’s favorite games enjoyed by his young audiences.

“He sees himself as a general in the ‘culture war’ and TPUSA’s members as ‘culture warriors’—effective ‘disrupters’ of the left on campus and eventually across America.”

Will TPUSA Turn the Tide for Trump in 2020? And what is the Long-Term Goal?

“On July 23, hundreds of students gathered  … The four-day event … [was] punctuated by speeches by prominent conservatives, from House whip Steve Scalise and Education Secretary Betsy DeVos to rabble-rousers like Sebastian Gorka and Anthony Scaramucci.”

“For four days, speaker after speaker, hour after hour, the audience is enraptured by such political entertainment and by the performative politics they’ve come to D.C. to join in.”

“The nation’s villains are obvious at TPUSA: liberals and the media …”

This “us-versus-them” discourse is nothing new in politics. But Kirk’s provocative style of using disinformation targeted at young people must be recognized for the danger it is creating. Therefore, prepare yourself to believe the unbelievable.

“… asking him [Charlie Kirk] about the further growth of TPUSA and whether he’d be interested in bringing the organization abroad. ‘I wouldn’t rule it out,’ he says. ‘It’s something we’re considering. We have groups in Canada.’ Is it something you could see in Europe? ‘Oh, without a doubt. I would love to take this global. Yes.’” (2018 Kid Trump) 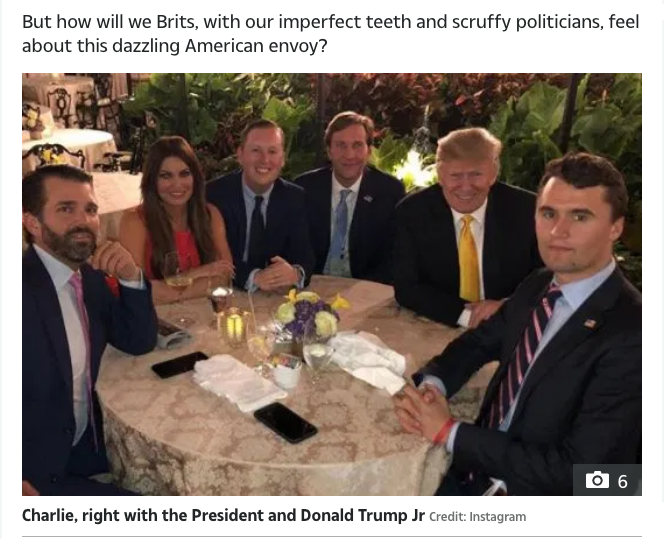 Not So Fast Say Traditional Republicans

Some Republicans are questioning Charlie Kirk and his tactics. Look at what Jordan Lancaster, a contributor to “Red Alert Politics,” had to say in 2019 about TPUSA’s growing influence among high school and college students.

“Turning Point claims to exist for the mission of ‘promoting the principles of fiscal responsibility, free markets, and limited government.’ In reality, it’s an organization that pulls kids too young to know any better into a group that’s deeply troubled and dishonest at its core.”

“To make matters worse, TPUSA has a troubling track record with racism.”

“Young conservatives should avoid Turning Point USA at all costs.”

That idea did not go on a back-burner.

“Kirk … is  … a smooth-talking, telegenic salesperson pitching Trump’s ‘Make America Great Again’ agenda to a young audience. Now he has radical ambitions to import its confrontational brand of activism to the UK.”

This is THE strategy. Find a cause, twist a few facts in with lies, ignite emotions, and later aim the enthusiasm at the real goal. But people are catching on. The question is, will enough catch on in time?

Back in the U.S.A.: Followers & Influence Grow

“GOP donors, strategists, and even presidential candidates are awed by his [Kirk’s] composure, his intellect, his passion for politics …”

2019: “… Turning Point has become the largest student movement in the USA, with 150 staff, a budget of $15 million, and a presence in no fewer than 1400 educational institutions.”

2020: “… $10 [ or $15?] million budget comes mostly from conservative billionaires and the oil and gas industry … funding … student training … including leadership conferences at the White House, attended by President Trump himself. Most of the money comes from very rich conservative donors … including … the in-laws of Education Secretary Betsy DeVos.

So, where does QAnon fit into the Kirk & Trump Show?

Well, for starters, both Kirk and Trump have promoted QAnon posts on Twitter. But much of the public is still unfamiliar with Q, QAnon, and Twitter. So again I remind readers, you might find this story unbelievable. 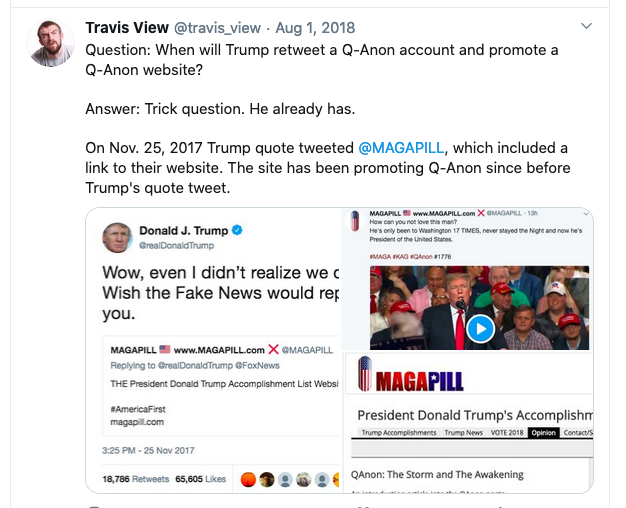 Is there “a simple explanation“? ……  But, is it acceptable behavior for a U.S. president?

In short, the anonymous “Q” first posted comments on what was called 8chan. Less than a month after Q’s first post, Trump tweeted the “QAnon-promoting Twitter account MAGAPILL” (2017).

This is the mechanism being used to shape the “culture wars.” This is how the Trump arm of the 2020 Disinformation War is being waged.

“Q” releases a post (sometimes cryptic in nature). Others pick up on it and social media is flooded. Here’s an example.

“On July 7, [2018] Charlie Kirk ….  published a tweet that contained startling but inaccurately sourced statistics about the alleged growth of human trafficking arrests under the Trump administration.” 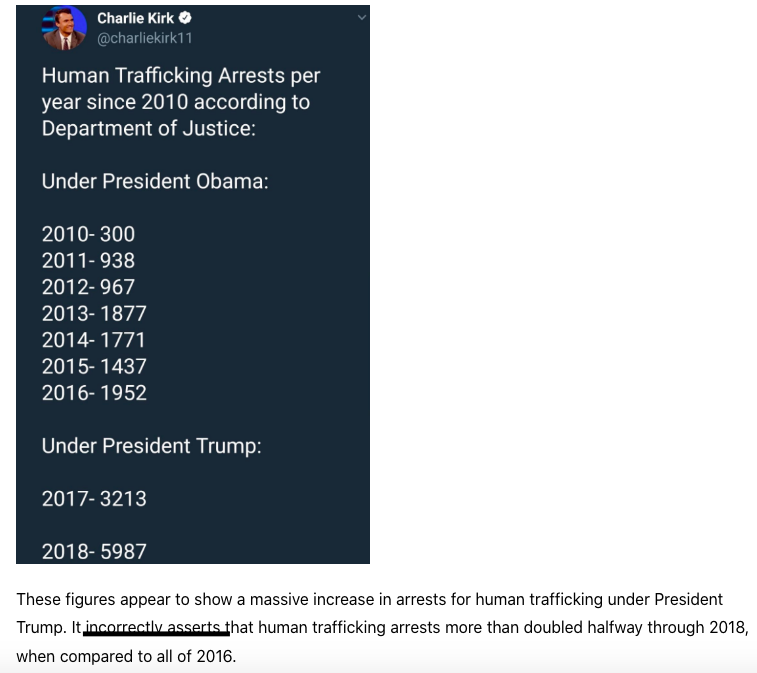 When Charlie was called out on it his tweet quickly disappeared. But the fake news spread over social media. Really? Is this THAT important? Yes! This disinformation feeds into the QAnon followers beliefs.

This is how it happens — by design. A fake story is released. 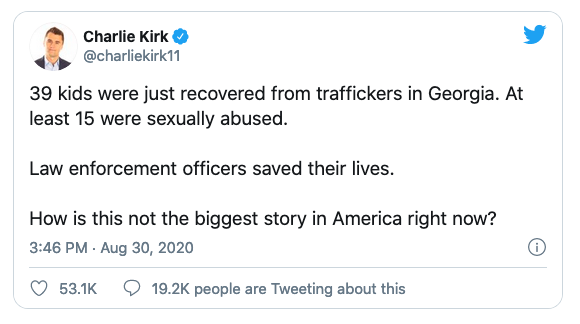 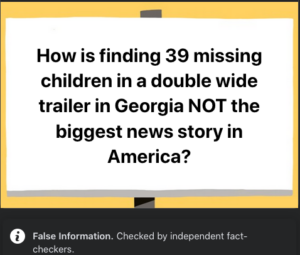 It spreads like wildfire. The meme making apparatus goes into overdrive. But before fact-checkers can slap a label on the disinformation, it has been consumed with the result being two-fold. First, this story feeds the QAnon conspiracy. Secondly, the fact-checkers become the villains thickening the plot as a main-stream media (MSM) cover-up.

“Yeah, there was no trailer.” This was not a sex-trafficking operation.

You see, QAnon supporters believe that a “deep state” of “elites” exists where pedophiles are running a global child sex-trafficking ring. They believe that Donald Trump’s claim to “drain the swamp” was in reference to his working diligently to end the atrocities and stop the conspiracy waged —by evil Democrats— against America.

How Effective is QAnon’s Spread of Disinformation?

“In July, Q believers co-opted the #SaveTheChildren hashtag and organized rallies that lured in a lot of well meaning people with no idea about the conspiracy theory behind it.” America’s Fastest Growing Cult

TPUSA’s influence runs high. Their effort to reach young hearts and minds runs deep. So  with their leadership linked to QAnon, they are more than a threat to national tranquility. Their agenda includes winning seats at every level of government. Therefore, the public must believe that the threat posed by Kirk, Turning Point USA, QAnon, and the Trump family is real and serious.

Back in May, Idaho political journalist Randy Stapilus wrote about Q and a 2017 remark where President Trump referred to “the calm before the storm.”

Mr. Stapilus went on to tell Idahoans about the Senate race in Oregon.

“[Jo Rae] Perkins [R], it turns out — this seems not to have been widely known beforehand — is a Q adherent. In announcing her win, she said on a video, ‘Where we go one, we go all. I stand with President Trump. I stand with Q and the team.’”

Stapilus called for QAnon candidates to stand up and let us know who they are and what they believe.

“QAnon’s conspiracy theory is a rebranded version of the Protocols of the Elders of Zion.”

Compare for yourself. Q’s rebrand is a watered-down version of this.

“A secret cabal is taking over the world. They kidnap children, slaughter, and eat them to gain power from their blood. They control high positions in government, banks, international finance, the news media, and the church. They want to disarm the police. They promote homosexuality and pedophilia. They plan to mongrelize the white race so it will lose its essential power.” From : “the 1902 Nazi newspaper, Der Stürmer —derived from the German word for ‘Storm’.“

The rise of Nazism began as a mass movement. But it did not have social media to use as an accelerant. However, consider this. Hitler understood how crucial it was to win over the youth to his side.

“Turning Point, funded by millions of dollars of dark money seems to have more in common with a culture war approach which embraces partisan gerrymandering and increasing restrictions on voting rights as necessary remedies to combat a liberal scourge.”

“But those things are profoundly undemocratic, as is running stealth student-government campaigns in order to enact an agenda which is hidden during the campaign itself.” SOURCE: Inside Higher Ed

THIS needs to be stopped NOW!

Remember, “things do not have to get worse … there is still time” for local and state actions to calm The Storm. 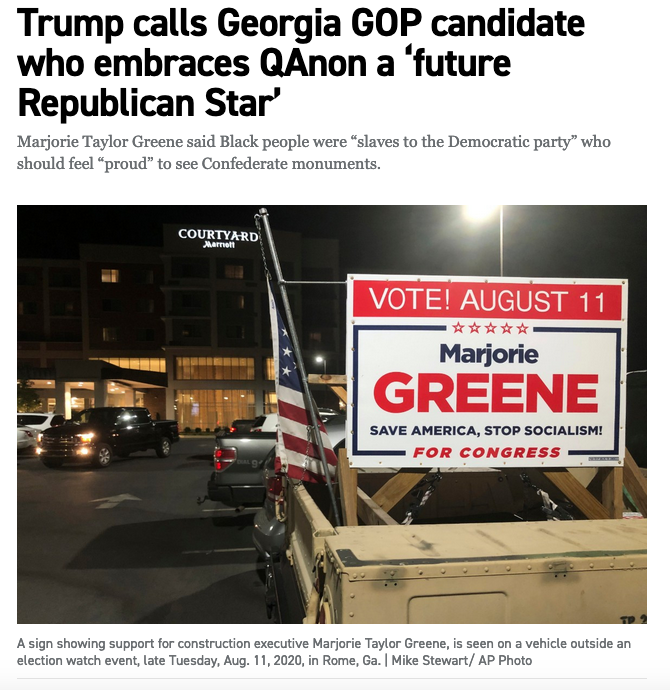