Fail, failing, failed — “Don’t Fail Idaho” is the new theme of advertisements on radio and other media here in this state. For me, it is a risk to even use the word (especially in a title) because many people won’t read past that word. The education reform war has created hyper-sensitized people making it less likely that we can even have a casual conversation about education. And that is exactly what we all should be doing every chance we get.

In a waiting room yesterday, I ran across an old acquaintance I’d worked with on a fundraising committee for a youth project many years ago. Believe it or not, I did not broach the education topic – at first. We talked about agriculture, our food supply, our land, rodeo, and politics. When we did get to education, he admitted he didn’t know much of what was going on in that arena but said, “It sounds like what I’m experiencing.” He moved closer to hear what I had to say.

My point: If we can’t get past some obstacles, establish a connection and some common understanding that we share a problem, we can’t expect to establish the kind of public support needed to overcome the forces we must in order to reclaim the public school system and re-instill some sanity to a “reform” effort. A dissenting voice can’t compete with a moneyed interest any way other than with people power.

Will this person I talked with jump right in the fight? I doubt it, but the next time he hears the “Don’t Fail Idaho” propaganda, I can bet you he will think twice about which “side” they represent. He will doubt. He will question what the best way to improve our schools really is. I bet he will compare any further effort to privatize schools to what he knows was the outcome of privatization of the prison system and he will relate it to a further takeover of our land and food supply — and he will make the connection to children. 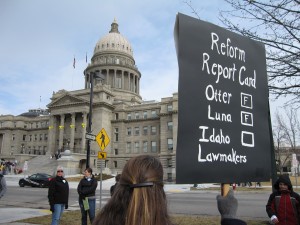 Failing to Make the Grade

Don’t fail to engage. Anyone know the rules for engagement?