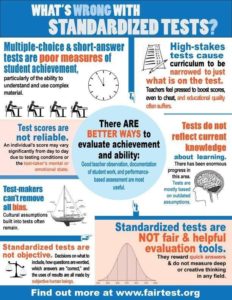 Why do we still have yearly testing mandated by federal law?

Did these tests improve education? The federal mandate began in 2001 with No Child Left Behind. Results?

If yearly testing is so important an ingredient in school improvement, why do we need it dictated by law? If these tests are so valuable and wonderful, won’t market forces be enough to drive their use?

I’m in Idaho. Our political leaders here strongly believe in the power of the free-market. They don’t believe the federal government should be involved in education. You would think they would be willing to fight to end the testing mandates of No Child Left Behind. You would think. 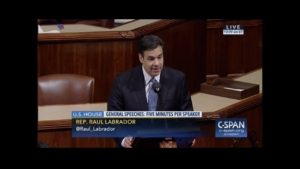 Did Representative Raul Labrador care enough about education to put any effort into getting rid of No Child Left Behind?

Listening to Idaho Representative Raul Labrador last night at his town hall meeting, I was struck by his words. He said he believes in keeping promises, in telling the truth, and how ignoring a constituent is never O.K.! REALLY?

I’ve been trying for three years to get this man to talk about education. My question this time was, if re-elected, would he work to end the federal mandate for yearly testing? He dodged it, again.

But the really, really sad thing about last night was the crowd. Big room, lots of people — a sea of gray hair indicating the Social Security/Medicare Generation (I’m not saying that begrudgingly. just sayin’). Young people were sparse.

I struck up a light conversation with the gentleman next to me before the show started. Afterwords, I asked him if he thought I had gotten an answer to my question. He quickly responded “No.” 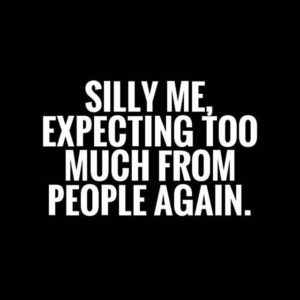 BUT, is it really too much to ask to have representatives who truly care about public schools and the children in them?

But it was what this man said next that was my take-home message. He said, “I don’t know anything about No Child Left Behind and I don’t care.”