100 years after the birth of John Fitzgerald Kennedy and with his birthday falling on Memorial Day, it seems fitting to look back in tribute at the education lessons JFK left behind. 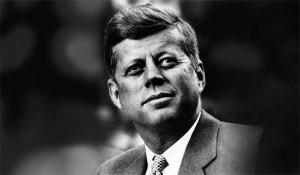 President Kennedy recognized that our country

“requires a citizenry that understands our principles and problems. It requires skilled manpower and brainpower to match the power of totalitarian discipline. It requires a scientific effort which demonstrates the superiority of freedom. And it requires an electorate in every state with sufficiently broad horizons and sufficient maturity of judgment to guide this nation safely through whatever lies ahead.”

— Final Special Message to the Congress on Education, January 29, 1963

Today, are this nation’s needs any different than when JFK made his proposals to congress?

In 1961, Kennedy’s first appeal to Congress on behalf of public schools was for support of his “twin goals”:

“a new standard of excellence in education and the availability of such excellence to all who are willing and able to pursue it.”

By April 11, 1965, over two years after JFK’s assassination, his “twin goals” became the aim of national education policy when President Johnson signed the Elementary and Secondary Education Act (ESEA),

“To strengthen and improve educational quality and educational opportunities in the Nation’s elementary and secondary schools.”

Kennedy emphasized the need to address “depressed areas” and “slum neighborhoods” where children are known to have: poor diets, unaddressed speech, dental and visual disorders, and where older students are in need of job guidance and proper recreational activities.

The first titles of ESEA addressed Kennedy’s concerns for a spectrum of disadvantages:

Title II – School Library Resources, Textbooks, and Other Instructional Materials to provide for access to educational materials for all students in the State.

Title III – Supplementary Educational Centers and Services to provide services not currently offered but deemed vital to educational improvement made available to the entire community.

Kennedy stressed that unlike in the health and agricultural fields where they “have established the worth of systematic research and development,”

the education profession “lags behind in utilizing the results of research.”

To remedy the problem;

With variability in quality and access between the states recognized as a problem, ESEA’s last title clarified the intent of federal education law.

Title V – State Departments of Education aimed to stimulate and assist in strengthening the leadership resources of State educational agencies.

In each education-focused special message to Congress, JFK expounded further and further on how he saw the proper federal role. He declared,

“Let us put to rest the unfounded fears that ‘Federal money means Federal control.’” And he held up the Northwest Ordinance of 1787, the Morrill Act of 1862 (establishing the Land-Grant College system), and the National Defense Education Act of 1958 as examples where “the Congress has repeatedly recognized its responsibility to strengthen our educational system without weakening local responsibility.”

And the 35-page law, the 1965 ESEA, was completed with a statement limiting the boundaries of federal power:

With the passage of ESEA, the major ideas that Kennedy and his advisers believed would strengthen and improve public schools were preserved — temporarily.

Today, both our federal boundaries and guiding principles are unclear.

So in memorial of President Kennedy’s birthday, May 29, 1917, let us recall how he wished to succeed in improving and strengthening educational opportunities for all the nation’s children.

Acknowledging that the quality of the students depends on…

“both the quality and the relative quantity of teachers and facilities,”

he emphasized class size, teachers’ salaries, and adequate classrooms as common problems particularly in need of assistance in states with limited financial resources.

“our immediate concern should be to afford them every possible opportunity to improve their professional skills and their command of the subjects they teach.”

He believed “teachers would profit from a full year of full-time study in their subject-matter fields. Very few can afford to do so.” The funding then proposed was to “begin to make such opportunities available to the elementary and secondary school teachers of this country and thereby accord to this profession the support, prestige and recognition it deserves.”

“Let us keep our eye steadily on the whole system,”

Kennedy asked that his final education proposal “be considered as a whole, as a combination of elements designed to solve problems that have no single solution.”

The nations’ goals were to be met “on the basis of three fundamental guidelines:

To honor limited federal involvement in education, the “appraisal” is a necessary first step because,…

federal “participation should be selective, stimulative and, where possible, transitional” and “the proper Federal role is to identify national education goals and to help local, state and private authorities build the necessary roads to reach those goals.”

Today, we will only be able to finish building the necessary roads by first removing the roadblocks.

We must look back and recognize that our country

“requires a citizenry that understands our principles and problems.”

Do citizens clearly understand the problems?

Are we standing on the right education reform principles?

Did “we” change our goals?

Consider this. President Kennedy’s twin goals were a force that led our nation well for decades. But the changes to the Elementary and Secondary Education Act (ESEA) over many more decades has taken us further from meeting those twin goals of quality and equality.

Congress lost its footing. They overstepped. And they landed on a very slippery slope.

In 1965, it was JFK’s twin goals that LBJ ushered into this law.

Title I funds clearly were part of the War on Poverty.

Those “other purposes” included basing the “quality” of education and access to it firmly upon standards and the tests associated with those standards. School Choice Programs were put in under Title I. Transportation costs were not included.

By the 2001 Bush administration, the whole law (NO CHILD LEFT BEHIND) was clearly Outcome-Based with accountability for all schools under federal control, flexibility with spending our federal dollars out of control, and school choice included in a variety of places. It was in sections under parental involvement, accountability, and supplemental services. The funding to assess transportation costs as well as picking up that cost in certain cases were included.

This is what NCLB Title I said ( “disadvantaged” ) but NCLB clearly had all public schools march to the same drummer – standards and testing – one-size-fits-all.

In a last-minute rush, the 2015 Obama administration signed into law the Every Student Succeeds Act. The law was renamed so many times in the year preceding the push that the public couldn’t keep up and the writers wrote “achieves” instead of “succeeds” in the final version. ESSA is not what the public was told it would be.

Title I officially has the federal government involved in the basic programs of all schools still based on the principles of NCLB with a ramping up of school choice at every turn, including pre-K charters, with the Secretary of Education given more power to start-up charters as well as providing the first year of transportation costs.

Don’t you think its time we all took a step back, stopped the federal overreach, and corrected the mistakes that have been made?

The education lessons JFK left behind for this nation provides us solid ground upon which to stand. That platform was built where practical knowledge of improvement practices met the need for equal access under the law.

I hope more of you will make the time to read and contemplate President Kennedy’s three messages to Congress on education (the only links in this blog). All real reformers should stand on the solid principles they provide before continuing to fight in the American education reform wars. That war is currently dividing the 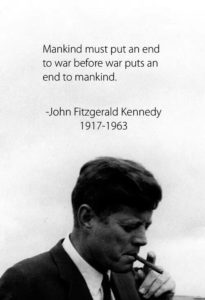 nation along ideological and political lines while allowing the dismantling of a longstanding system that served us well.

Let us read, understand, remember, and use the education lessons JFK left behind.