Spoken by Martin Luther King and repeated often, do the words “the fierce urgency of now” no longer stir our souls? Did they ever?

Why the Urgency NOW?

The urgency is the need for all of us to filter out the divisive political language coming at us from all sides. In this moment, we need to look back at what was once only a theory. Now our reality is that economic theory fostered a political strategy to supplant our constitutional republic with “a private governing elite of corporate power.” *

“…kill public education because it tend[s] to foster community values…” *

And market-based education reforms became the weapon of choice. But the role of political economist James M. Buchanan is only now being closely scrutinized. Buchanan’s theories explain much about the divisiveness destroying our schools and our nation.

“…[Buchanan] observed that in the 1950s Americans commonly ASSUMED that elected officials wanted to act in the public interest. …[T]hat was a belief he wanted, as he put it, to ‘tear down.’ His ideas developed into a theory that came to be known as ‘public choice.’” *

Public interest is defined as “the welfare or well-being of the general public.” It is a national goal clearly stated in the Constitution’s preamble — “in Order to … promote the general Welfare…”.

To “tear down” our assumption that officials are acting in the public’s interest is one thing. To destroy our union is another. That goal does NOT appear to be one of the aims of Buchanan’s original 1986 Nobel Prize winning work on “Public Choice Theory.”

In its announcement of the prize, the Royal Swedish Academy of Sciences noted, “Buchanan’s foremost achievement is that he has consistently and tenaciously emphasized the significance of fundamental rules and applied the concept of the political system as an exchange process for the achievement of mutual advantages.” Tennessee Encyclopedia (James McGill Buchanan)

His “research program” ** centered on the belief that people make purchases (market choices) based on value. He saw the public making political choices they believed would benefit them. He viewed us as making choices based on our own “venal self-interest.” *

So he and his ilk developed what they called “non-market decision-making.” Finding that name “awkward” and not as appetizing to “free-market” thinkers, the groups’ organization and publications took on the name “Public Choice.” **

Some researchers believe that Buchanan’s Public Choice Theory began as an “optimistic conception” based on “unanimous consent of the people.” But he later adopted a more “pessimistic view” about “social organization” and people’s “intolerance” to entering into the discussions necessary to reach consensus on issues. Thus Buchanan’s emphasis morphed from “individual freedom” to the need to “enforce order.” ***

As Buchanan explained “Public Choice” to an audience (2003) …

“Public choice, in its basic insights into the workings of politics, incorporates an understanding of human nature that differs little, if at all, from that of James Madison and his colleagues at the time of the American Founding.” **

Buchanan wrote that for public consumption. It’s a distortion of history, which is likely being perpetuated through institutions such as George Mason University in Virginia.* And in misrepresenting the American Founding Principles, Buchanan opened himself up to being viewed as a major manipulator in our historic fight against corporate control.

As a key author of the Constitution, Madison left a record of discussions about our nations founding principles. Therefore, a better understanding of the American Founding political views can be gleaned from Madison’s correspondence with a colleague who Buchanan also admired. ***

“With regard to Monopolies, they are justly classed among the greatest nuisances in Government. … Monopolies are sacrifices of the many to the few. Where the power is in the few it is natural for them to sacrifice the many to their own partialities and corruptions.”

“…that a succession of artful and ambitious rulers may be gradual & well timed advances, finally erect an independent Government on the subversion of liberty. … Is there not also infinitely less danger of this abuse in our Government than in most others? … with the power as with us is in the many … It is much more to be dreaded that the few will be unnecessarily sacrificed to the many …”

It appears the expressed sentiment of that last sentence was taken to imply that corporations are the ones in need of constitutional protection from the masses. But Buchanan obviously took Madison’s words out of their historic time and context. Regardless, Buchanan did communicate to the public an association of his “public choice theory” with our nation’s founding principles.

****This quote is from the blog of libertarian economist, Daniel J. “Dan” Mitchell who believes Buchanan’s ideas are being misrepresented.

Not Quite! Think about the following in relationship to the privatization of public education through “school choice” models. The allure of choice is deadly.

With our political choices being analyzed under market-based economic theory, it is assumed people make choices based on their own self-interests — first and foremost. We shouldn’t deny that as a truism. But when market forces through privatization of public services or goods come into play, competition for a limited supply will result in winners and losers. Always does.

We risk having children lose, or never develop, the safe and secure sense of belonging that defines “community values.” When all of us are seen as “self-interested players in the marketplace,” **** we are vulnerable to division. Competition for public services runs the high risk of destroying community values, but, that part of the equation didn’t seem to garner much consideration.

Instead, Buchanan saw the need to bring his vision to life by NOT focusing on who rules because who the public chooses doesn’t matter since elected officials don’t act in the public interest anyway. Therefore, this political economist focused on the rules themselves.

“… the Holy Grail was the Constitution: alter it and you could increase and secure the power of the wealthy in a way that no politician could ever challenge.” * 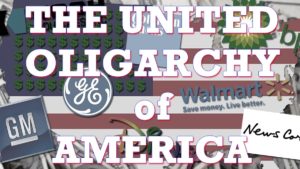 What Madison saw as improbable under our constitutional republic — “a succession of artful and ambitious rulers” changing the balance of power — is exactly what is happening. Our federal government IS under the control of special interests. Many state governments are no different because too many of our representatives ARE no longer serving in the public interest.

The toxic divisiveness of party politics is permeating our communities. The principles of localism and populism, which formed the fabric of our founding documents, are being replaced by corporatism. Thus, when we can no longer reach consensus on the issues that matter, the authorities will step in and set the rules “to enforce order.” ***

This scenario should sound familiar to Baby Boomers. It was a shared American experience on many college campuses during the protests of the 60’s and 70’s. Martial law was declared in many places, which Buchanan supported (at Berkley***). And not to be forgotten were the killing of students by the National Guard. That’s about the time Buchanan’s vision of “unanimous consent of the people” *** seemed to change.

“… MacLean points to the fact that Henry Manne, whom Buchanan was instrumental in hiring, created legal programs for law professors and federal judges which could boast that by 1990 two of every five sitting federal judges had participated. ‘40 percent of the U.S. federal judiciary,’ writes MacLean, ‘had been treated to a Koch-backed curriculum.’” *

Think about the urgency demonstrated during the confirmations of both Education Secretary Betsy DeVos and Supreme Court Justice Brett Kavanaugh. Ask yourself, why the fierce urgency?

Think about it. When changing the Constitution is still out of reach, CONTROL of the U.S. Department of Education and having corporate-minded allies on the Supreme Court are a handy pair of tools. Then it requires pushing appeals through the court system to the level of the Supreme Court. Once there, having enough justices interpreting our Constitution and rules in ways that favor corporations and the wealthy is almost as good as a “constitutional revolution.” *

This is no longer just theory and we knew this day was coming. Now …

“We are now faced with the fact that tomorrow is today. We are confronted with the fierce urgency of now.” MLK

Is that enough? Absolutely not.

* FROM THE LEFT ⇒ Lynne Parramore, “Meet the Economist Behind the One Percent’s Stealth Takeover of America”

2 thoughts on “The Fierce Urgency of Now”