Across the country, people are rising to the challenge of beating back wrongful “education reforms.” The movement against high-stakes testing got rolling with 545 local school boards in Texas adopting a resolution against standardized testing. Other states including Florida, Oklahoma, Ohio, and Virginia have followed suit with many parents joining in by opting their students out of the testing in states such as New York, Washington, California, and Colorado.

And from education funding to education “reform” laws, the fate of public education is being placed before voters through state ballot measures in numbers not seen for 20 years. My state of Idaho is one of those states. Much is at stake.

In general, our lawmaking process has been corrupted by money and our minds have in the past been swayed by propaganda. We have been used in ways we may not realize until it is too late. But even as we acknowledge that money is a very, very powerful influence, we need to place our faith in the American people that they will rise up to this opportunity to support public schools. All is not lost. 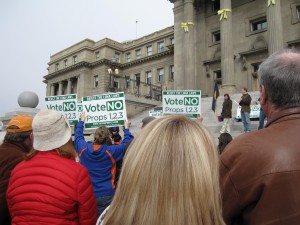 At a rally here in Idaho yesterday, these were some of the parting words spoken: “Support quality education in Idaho.”

And that is what will be extremely important. When we have defeated what we know is wrong, we must be there to promote and support what is right.