Following my own advice, I took a few moments this morning to stop and think. I reflected on the efforts of so many who are struggling for quality education. I wasn’t thinking about the very public and petty fighting of politicos or the influential; I was thinking about regular folks in the trenches.

It’s believed that human nature is such that we are more inclined to unite against a thing or person that we hate rather than rally around something we love. Hate can be seen as a more unifying force than love. Frustrating and sad — but it’s a reasonable explanation for why it’s so hard to get people to rally on behalf of this country’s children. It almost sounds like an impossibility to overcome all of the forces working against the institution of public education. And they are real, powerful and many.

I have been asked before and again recently; how do you continue this fight against seemingly hopeless odds? I’ve never had a good explanation. But like most things, the answer is usually right in front of us; we just can’t see it until we are ready to.

I am a true believer in the idea that knowledge is powerful. Think about it; if we know something about human nature, can’t we then use that knowledge to change or direct an outcome? Sure we can; it’s done all the time — advertising, propaganda, persuasion of any kind.

So today, I have something to add to the advice “stop and think.” Listen, question, learn, and use the knowledge you have gained. As Francis Bacon (father of the scientific method) argued, inquiry will “…assure man’s mastery over the world.” Seek knowledge about the topic for which you wish to change. 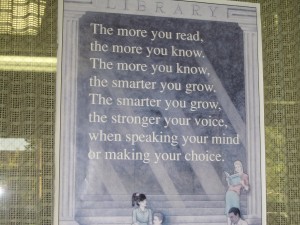 P.S. I saw my book yesterday for the first time!